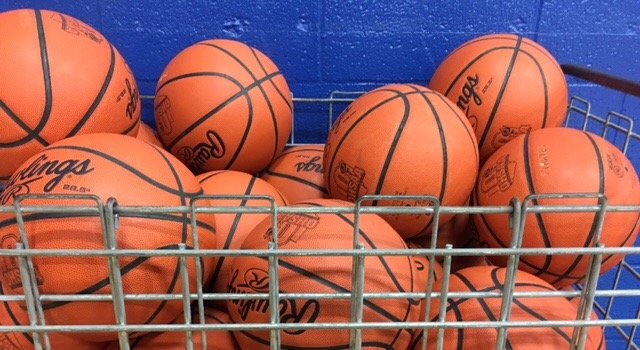 “Your #1 ranked State Ranked DIII Vikings” was the start of the Miami East intro lineup on Friday night as the Vikings hosted Lehman Catholic in a Three Rivers Conference game.  The Cavaliers did not seem intimidated with the proclamation as they opened up the game’s scoring by hitting a 3 to put them in the lead.  That would be their only lead of the night as the Vikings would put in the next 7 points with Devon Abshire making a pair of baskets and Wes Enis hitting a 3.  Vikings 7-3.  A basket by the Cavaliers would make it a 2 point game.  The Vikings would expand their lead to 7 as they would get a 3 from Camren Monnin and a pair of free throws from Enis.  Vikings 12-5.  But the theme of the night was whenever the Vikings would put some distance on the scoreboard the Cavaliers would rally back.  The Cavaliers would put in a pair of baskets and a 3 to tie the game at 12.  The Vikings would finish off the quarter scoring with a Connor Apple 3, Vikings 15-12 after 1.
The start of the second quarter had the Vikings increase their lead to 8 as they got a 3 from Apple and a pair of free throws by Jacob Roeth.  Vikings 20-12.  A basket by the Cavaliers was followed up by an Enis 4 for a 9 point Viking lead 23-14.  A 4 point Cavalier rally made it a 4 point game Vikings 23-18.  A pair of Roeth free throw finished off the second quarter scoring.  Vikings 25-18 at half.
A pair of Enis free throws would put the Vikings up by 9 to start the third quarter, 27-18 Vikings.  A Calavier basket would cut the Viking lead to 7 but the Vikings would put in the next 8 points getting a baskets from Enis and Roeth and a pair of free throws from Roeth to take a game high 33-20 lead.  The Cavaliers would close the third by scoring the last 6 points.  Vikings 33-26 after 3.
The Cavaliers would start the 4th quarter with a pair of free throws to get with 5 of the Vikings, 33-28.  The Vikings would expand their lead to 10 with a Bryce Haught 3 and an Enis basket.  Vikings 38-28.  A Cavalier 3 was followed up by a Roeth basket and a pair of Enis free throws.  Vikings 42-31.  The Cavaliers would hit a 3 to cut the Viking lead to 8 but that would be their last points.  The Vikings would finish up the scoring with Roeth going 4-4 from the line.  Vikings 42-34 final.
Curtis Enis led the Vikings with 18 points while Jacob Roeth put in 12.  Connor Apple scored 6, Devon Abshire 4, and Camren Monnin and Bryce Haught both had 3 points.  The Vikings made five 3 pointers with Enis and Apple both making 2 while Monnin and Haught both made 1.  The Cavaliers had four 3 pointers.  The Vikings were 12-15 from the line with Roeth going 8-9 and Enis going 6-6.  The Cavaliers went 4-6.
Miami East improves to 15-1 (9-0 TRC) and will travel to Milton Union for another TRC matchup.  Lehman Catholic falls to 8-6 (4-5 TRC).
Miami East hosted staff appreciation night where Winter Sports Seniors selected a member of the facility to be honored.  Friends of the Continentalenews sports Head Coach Jacob Roeth and Junior Varsity Matt Rutlege were among the 14 staff members to be honored.  Two of the honorees were bus drivers.
Continentalenews will cover Miami East Boys Basketball as their schedule permits.  Jacob Roeth is the grandson of Roxy and David Chivington both Continental High School graduates.  Continentalenews is based out of North Creek Ohio and covers sports of interest to the greater Continental area.
–Mike Jones, Sportswriter