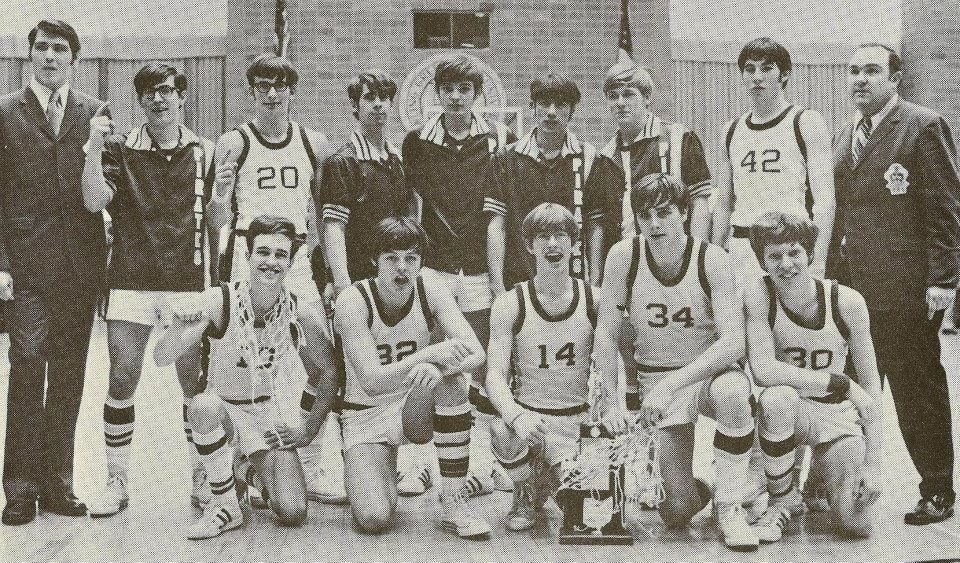 The Pirates first trip to the OHSAA Boys Basketball Class A State Semifinal was made possible by winning a pair of exciting games in the Lima Bath District over Lincolnview and Putnam County League Champs Ottoville and Bowling Green State University Regionals over Mansfield St Pete and Hardin Northern.  Excitement reigned in Continental as seemingly everyone was going to the game.  For many it would be their first trip to Columbus and the Ohio State University.
The Pirates went down to take on Ridgedale who they had lost to earlier in December.  Ridgedale had advanced out of the Athens Regional while Indian Valley South (Steubenville Regional) and Saint Bernard (Oxford Regional) made up the rest of the field.
The Pirates and Rockets game had each team winning two quarters.  The game started out with Ridgedale winning the first quarter 19-10.  The Pirate offense would be on fire in the second quarter as they put in 25 points to the Rockets 17.  Rockets 36-35 at half.  The Rockets controlled the scoring in the third by taking the quarter 21-13.  Rockets 57-48.  The Pirates would comeback in the fourth but it would not be enough as the Rockets advanced to the finals 74-70.
Ron Winkle led the Pirates with 20 points while Greg Spitnale would add 17.  Don Brown put in 13, Terry Bragg 10, Ron Weisenburger 6, Jim Troyer 3 and Frank Tegenkamp 1.  Ridgedale outscored the Pirates 20-10 from the line.
Indian Valley South would meet Ridgedale in the finals with Indian Valley South winning the other Semifinal over Saint Bernard 60-36.  Indian Valley South, lead by Ohio State recruit Larry Huggins would take home the 1972 OHSAA Class A Boys Basketball title with a 59-41 win over Ridgedale.
Continental would finish the season 19-6.  This was Don Huber’s first year as head coach.  The Pirates would take sectional titles in the next 8 season (after having only one sectional title before 1972.  In that time frame, the Pirates would return to Bowling Green Stat University twice (1974 and 1977) for Regionals and the State Tournament again in 1977.  The 1972 team left quite a winning legacy.
–Mike Jones, Sportswriter