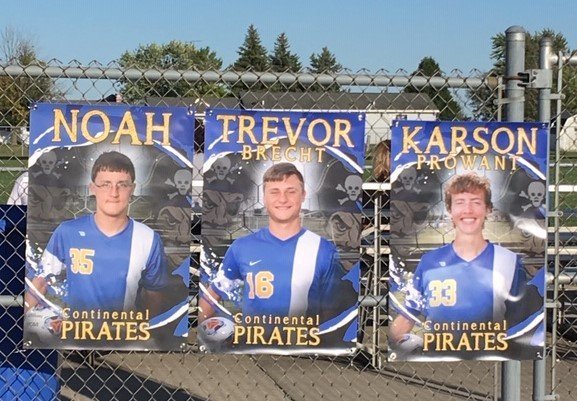 On Tuesday, Sophomore Wyatt Davis continued his hot streak for the Pirates as he added a goal and an assist to his 2019 total.   Davis has hit the back of the net in 8 of the last 9 games.  Against Pettisvlle Davis opened up the night’s scoring with a goal at the 17:29 mark in the first half.  Junior Westin Okuley picked up the assist on this goal.  A little over 8 minutes later Senior Trevor Brecht put one in for the Pirates off a Davis pass.  The Pirates would have a 2-0 halftime lead.  There was no scoring in the second half as the Pirates emerged from Senior night with a 2-0 win.

Continental controlled the action with 9 shots on goal to Pettisville 2.  The Pirates had 5 corner kicks to the Blackbirds 1.  Continental goalie Konnor Knipp-Williams had 2 saves in the shutout.

Continental improves to 9-5-1 and will travel to Lima Temple Christian on Thursday in a makeup game that is also the regular season game.  Pettisville falls to 4-9-2.

The game was Continental’s last home game of the regular season and was Senior night.  The Pirates 3 Seniors Trevor Brecht, Noah Becher, and Karson Prowant have combined for 9 goals this season.  Continentalenews wishes a successful future to these seniors.