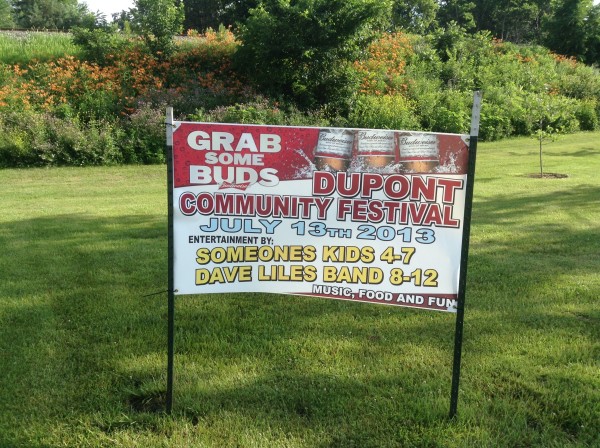 The Dupont Community Club is hosting the Dupont Community Festival on Saturday, July 13. The day will begin with a 3.6 mile “Run/Walk Around the World” For a Cure. Registration will begin at 8am and the run starts at 9:15am with the walk starting at 9:20am. The course is what is commonly known as “around the world” to those from the area – it begins on Cedar Street east out of town and then turns right on Road H-22 and continues along the river to State Route 634 south of Dupont, and with a right turn ends up at the four-way stop in town.
A Chicken BBQ by R&B Meats of Continental will be served at the Town Hall beginning at 3pm until sold out. The Beer Garden will open at 3pm at the corner of Seneca and Liberty Streets.
Bring your car, truck, or motorcycle to the Cruise In on Cedar Street beginning at 4pm and come on down to listen to the first of two bands featured at the festival. Someone’s Kids will be playing from 4pm – 7pm and The Dave Liles Band, making their second appearance at the festival will play from 8pm – midnight.
The festival will offer kids and adult games, a dunk tank, Life Flight and finally an auction of donated items at approximately 10pm. Concession stand will be offering hamburgers, hot dogs, and bologna sandwiches.
Come on down and enjoy a relaxing time in Dupont with music, food, and fun.