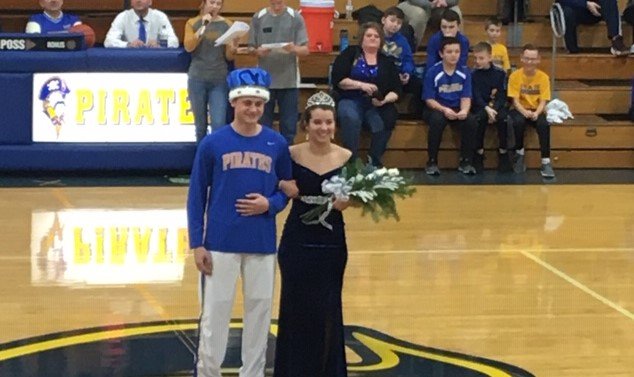 After the Homecoming festivities it was a tale of two halves as the Continental High Boys dominated the first half only to see North Central do the same in the second. After the successful passing of the Homecoming crowns to Queen Kerri Prowant and King Trevor Brecht, the crowd settle in to see the two teams battle. North Central opened up the scoring with a basket that was followed by a Reed Warnement basket, a pair of Mitchell Coleman free throws and a 3 by Coleman to make it Pirates 7-2. A basket by the Eagles was bettered by the Pirates when Trevor Brecht hit a pair of free throws and Gavin Huff sank a 3 to make it 12-4 Pirates. A free throw by the Eagles was followed up by a Gavin Huff basket to make it Pirates 14-5. A three by the Eagles would finish up their first quarter scoring but the Pirates were not done as they put in 9 more points with Huff hitting a pair of baskets, Brecht a pair of free throws, and Armey a 3. Pirates 23-8 after 1.

The Pirates added 5 more to their lead at the start of the second as Huff made a basket and a 3 to make it 28-8, the Pirates largest lead of the night. An Eagle free throw and basket was followed by a Andrew Hoeffel basket Pirates 30-12. The two teams exchanged points as the Eagles made a basket and the Pirates got a pair of made free throws from Coleman. A pair of made Eagle free throws matched by a Gannon Prowant basket Pirates 34-16. The two teams would both hit a 3 to finish up the first half scoring 37-19. Coleman hit the 3 for the Pirates.

After a spirited halftime dance routine by the Jr High cheerleaders, it was all Eagles in the third quarter. The Pirate put in 3 baskets, a pair by Warnement and one by Prowant while the Eagles poured in 20 points to cut the Pirate lead to 4. Pirates 43, Eagles 39 after 3.

Huff would start out the fourth quarter scoring by making a pair of free throws Pirates 45-39. An Eagle basket was followed up with a Coleman 3 to make it Pirates by 7, 48-41. An Eagle 3 was matched by another Coleman 3, Pirates 51-44. The teams would exchange made free throw with the Pirates Warnement making 1, Pirates 52-45. A ten point Eagle run (6 free throws and 2 baskets) would put the Eagles in the lead for the first time since early in the first quarter 55-52. The Pirates would tie the score at 55 with a Coleman 3 but then it was all Eagles as they outscored the Pirates 7-2 in the waning minutes of the game. Eagles 62, Pirates 57 final.

Continental falls to 4-11 and will travel to Wayne Trace on Tuesday. North Central improves to 8-8.