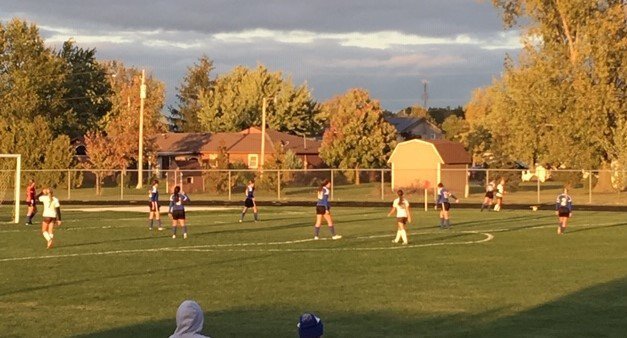 On Thursday, Evergreen made the hour long trip from the Michigan border to take on host Continental in a OHSAA Girls Soccer Division III Evergreen District Sectional Semifinal game.  Evergreen brought with them a stiff breeze from the North that not only was chilling but also effected the ball flight.  It looked like a night that whoever could use the wind to their advantage would end up the winner.  Evergreen had the wind at their back in the first half and took advantage with 2 goals.  A little over 8 minutes into the game the Vikings had a shot from just outside the Penalty area that got up in the wind and made it to the upper right corner of the goal.  Vikings 1, Pirates 0.  The Vikings would make it 2-0 when they would put in a rebound off the Pirate goalie less than 2 minutes later.  Neither team would score the rest of the half for a 2-0 Viking lead at half.

With the wind behind the Pirates back in the second half the game turned the Pirates way as Pirate Senior Alex Hoeffel took a pass form Maddie Burke and split the defenders  and put a shot in the upper left corner of the goal to make it a 1 goal game – Vikings 2, Pirates 1, one minute into the second half.  With 26:58 Hoeffel would even the score when she blasted a shot from the 20 over the Viking goalie to make it 2 all.  The Vikings would retake the lead 2 minutes later when they floated a shot from the 25 over the Pirate goalie to make it 3-2 Vikings.  The Pirates would have a number of chances late in the game but either hit the goal post or were just wide.  Evergreen 3-2 final.

#4 seed Continental finishes the season at 11-6.  #5 seed Evergreen is 8-8 and advances to the Evergreen District Semifinals where they will take on #1 seed Archbold on Tuesday.

This marks the final soccer game for Pirate Seniors Alex Hoeffel, Katie Keller, and Addy Armey.  Thanks for 4 memorable years  on the field and good luck in the future!

This game was rebroadcast on WOSN.