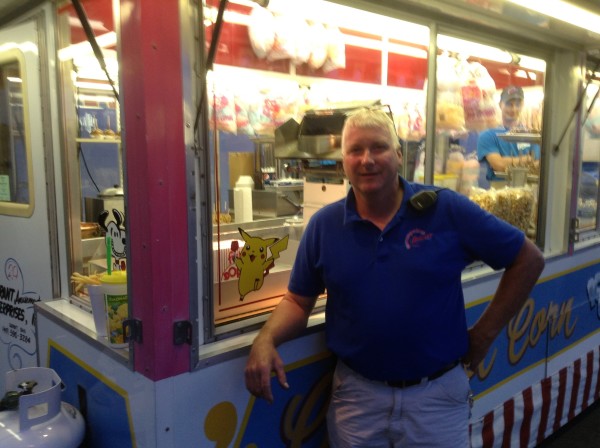 Durant Enterprises, Inc. of Dupont is a large part of the midway at the Putnam County Fair. Durant’s is a family business, owned and operated by JoAnne, Bill, and Anissa Prowant for over fifty years. On Thursday evening Bill slowed down long enough at the fair to share the story of their family business.
The concession business began with the purchase of a popcorn machine by JoAnne’s parents, Warren and Aura Myers in 1932. They ran a General Store in Dupont and needed a way to generate cash during the Depression years. Along with the popcorn machine, they purchased a movie projector and traveled town to town, showing movies on the sides of buildings and selling popcorn. Not long after that, they added a custard machine and the business continued to grow.
JoAnne and Ray were married in 1948 and went to work for the family business. In 1966, they took over the concession business and purchased their first two rides. To the 2013 Putnam County Fair, Durant’s brought 17 rides, 14 food trailers, and 70 employees. When they roll out Saturday night, thirty-five trucks will move them to the next location.
Thank you, Bill, for sharing your family’s legacy – and it all began with a popcorn machine.