Continental – James S. Donaldson, 65, formerly of Continental, died 6:20 p.m. Thursday, May 15, 2014 at his residence in Corvallis, Oregon. He was born October 21, 1948 in Defiance, Ohio to the late Walter and Beulah (Halbgewoks) Donaldson. Several days later he was at Cleveland Clinic to address some birth defects which would shadow him the rest of his life.

He graduated from Continental High School in 1967. Jim was limited in his activities on the farm due to his diabetes from age nine. However, he had a willing heart in spite of an often uncooperative body, as evidenced by his caring for his mom and dad in their later years. After graduation, he worked for H&K Chevrolet Pontiac Buick Parts Dept. in Continental and Mark Moats Ford, parts departments, in Defiance for over thirty years. He had his first dialysis treatment on his birthday in 2001. In 2003, he moved to Corvallis, Oregon with his mother to live with his sister, Karen. While there he made many friends at the dialysis center, the hospital, at church and with neighbors he would visit on walks with his dog, Sibelius.

A friend wrote to Jim before his passing, “You have faced some very difficult trials in your life. I believe there is greater reward in heaven for trials we face on earth. I also believe that if we could quiet our fears and disappointments we would see God standing by comforting and caring. This life on earth is never perfect. It is so we can look forward to Heaven’s perfections and seeing those we love who went before.”

Jim was a loyal son, friendly, kind – hearted, good working man who will leave behind many memories for his sister, Karen Ferguson, brother-in-law Don Ferguson of Corvallis, Oregon, nieces: Sara (Chris) Clark and Amber (Alex) Solomon, and a nephew: Jeremy(Morgan) Ferguson, great-nephew Teddy Clark, many cousins in the tri-state area and friends wherever he lived.

A funeral service will begin at 12:00 noon Wednesday, May 21, 2014 at HEITMEYER FUNERAL HOME, Continental, with Pastor Brent Gibson officiating. Burial will be next to his parents at Monroe Cemetery, Continental. Visitation will be from 10:00 a.m. till 12:00 noon, on Wednesday at the funeral home. Fellowship will follow burial at the North Mount Zion Church.
In lieu of flowers and gifts, donations may be given to the American Diabetic Association, the National Kidney Foundation, North Mt. Zion Church or Benton County Hospice in Corvallis, Oregon.
Condolences may be expressed at www.heitmeyerfuneralhome.com. 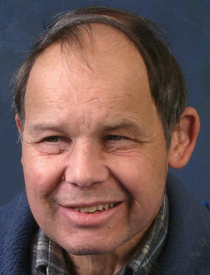