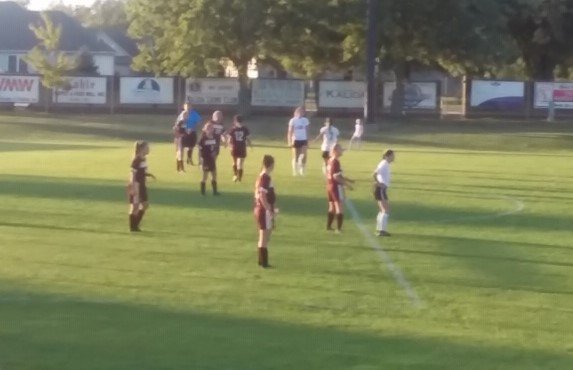 If you showed up late to the Continental Kalida Girls Soccer game you missed the deciding goal.  The Wildcats put in the first goal of the night in the first minute of action to stake themselves to a lead that they would not relinquish.  With the Putnam County League Championship on the line a hard fought game was expected and both sides delivered on Tuesday night at Kalida.  The Wildcats would make it 2-0 with a shot from the 18 a little under 10 minutes into the game.  The Pirates would get on the board less than 2 minutes later when Senior Alex Hoeffel blasted in a free kick from the 24.  The Wildcats would also put in a free kick that bounded off a couple of player and then found its way into the goal with less than 10 minutes left in the half.  The Pirates would pull within 1 when Freshman Jensen Armey would push in a pass form Junior Maddie Burke by the goalie with 2:44 left in the half.  Wildcats 3 Pirates 2 at half.

The game would end Wildcats 3 Pirates 2 as both team had great chances but could not convert in the second half.

Continental falls to 11-5 (3-1 PCL) and will host Evergreen on Thursday Oct 17 in OHSAA Division III Girls Soccer Evergreen District Sectional Final Action.  Kalida claims the PCL crown with a 4-0 record in league and a 9-6 record overall.