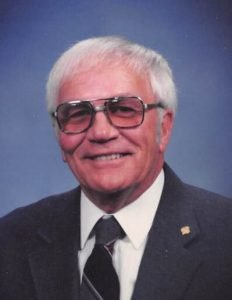 Keith D. Mansfield, 86, of Defiance, passed away early Friday morning, October 9, 2020 at The Laurels of Defiance, with his loving family by his side.

He was born on November 27, 1933 to the late Donald and Marjorie (Richard) Mansfield in Defiance County, Ohio. On June 9, 1957 he married Natalie Ladd. Keith graduated from Ayersville High School in 1951. He proudly served our country in the U.S. Army during the Korean War.

Keith was a faithful member and trustee of First Presbyterian Church, a charter member of Continental Lions Club, and a member of Continental American Legion #541. He enjoyed gardening, yard work, working with wood in his work shop, and NASCAR racing. He was a truck driver for Philips for 35 years until his retirement in 1991.  Keith received a “Million Mile Accident-Free” driving award while working for Philips. He loved to travel and spend time with his family.

In addition to his parents, he was preceded in death by an infant daughter, Jill Renee, and brothers, Noel and Lynn Mansfield.

Due to the recent pandemic, a private service will be held for the immediate family. Burial will take place at Monroe Cemetery in Continental, Ohio, with military graveside rites accorded by Continental American Legion. Schaffer Funeral Home assisted the family with arrangements.

In lieu of flowers, the family suggests donations be made to First Presbyterian Church, or to a charity of the donor’s choice. Online condolences can be given at www.Schafferfh.com.