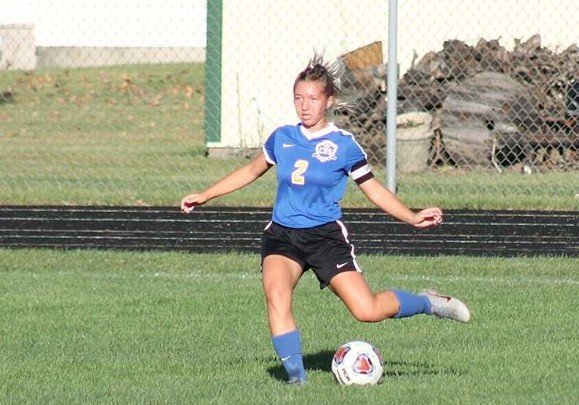 On Thursday Ottoville was determined not to let the Pirates score in a key Putnam County League game.  Having 4 Big Green defenders not leave the backfield and man marking Pirate scorer Alex Hoeffel the strategy worked for the first half as they held the Pirates scoreless.  The Pirates did have a number of shots on goal but none hit the mark.

The second half the Big Green defensive effort worked till the 28:44 when Addy Armey put a shot in from the 18 the bounded off a couple of Big Green defenders.  Hoeffel would make it 2-0 when she would put in a shot from the same location as Armey that went under the Big Green Goalie.  The Pirates would make it 3-0 when Maddie Burke would knock in a centering pass from Hoeffel.  Hoeffel would get her second goal of the night when she split the Big Green D and scored from the 10.  Ottoville would get on the board with 2:33 left when the headed in a crossing pass.  Pirates 4, Big Green 1 final.

Continental improves to 11-4 (3-0 PCL) and will travel to Kalida on Tuesday as the two teams will decided the Putnam County Championship.

Thursday was senior night for the Pirates as Addy Armey, Alex Hoeffel, and Katie Keller had their last regular season home game wearing the Pirate colors.  The Pirates also recognized the two Big Green Seniors at the start of the pregame festivities.

Fun facts about the Pirates Seniors:  Armey is currently a full time student at Defiance College and will be going to University of Cincinnati and will be in the Air Force ROTC there.  Hoeffel is 4th in OHSAA career goal scoring with 165 goals.  Keller placed 5th last year in the Division III 300 Hurdles.