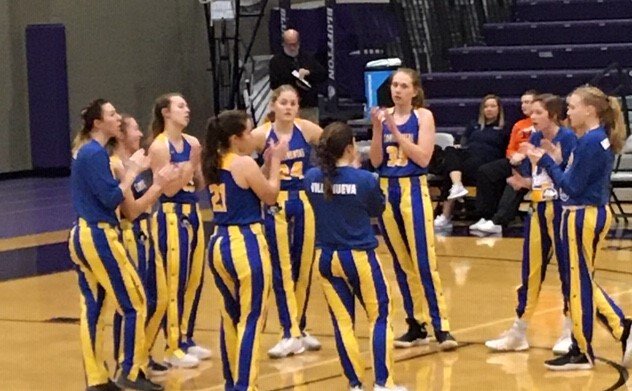 The Pirates had a 5 point lead with just over 3 minutes to go in the game but it wasn’t meant to be on Thursday as North Baltimore finished out the OHSAA Ottawa-Glandorf District DIV Girls Bluffton University Sectional Semifinal on an 11 point run. The two teams started the game out with the Tigers hitting a 3 and Continental Junior Catelyn Etter also hitting a 3. A basket by the Tigers was followed by Senior Kerri Prowant hitting a 3 to give the Pirates a 6-5 early advantage. The Tigers would open up a 6 point lead as the would put in 9 of the next 11 points with Etter making 2 for the Pirates Tigers 14-8. Junior Madelyn Potts would hit a 3 to finish up the scoring in the first quarter. Tiger 14, Pirates 11.

The second quarter would start with the Tigers making a basket and the Pirates Potts doing the same for a 16-13 Tiger lead. The Tigers would extend their lead when they drained a pair of 3 for a 22-13 lead. A 3 by Potts cut the Tiger lead to 6 22-16. The Tigers would make two more baskets in the quarter to finish with 26 and a 10 point lead. The Pirates Etter would hit a 3 and a 2 to make it a 5 point game at half. Tigers 26, Pirates 21.

The third quarter would be all Pirates but the Tigers opened up the second half by hitting a pair of free throws 28-21. A 3 by Senior Addy Armey and a pair of free throws by Etter but the Tiger lead to 2 28-26. A basket by the Tigers made it a 4 point game but the Pirates would finish the quarter by hitting 3 baskets, 2 by Armey and 1 by Etter, to to take their first lead since early in the first 32-30 after 3 quarters. The Pirates would outscore the Tigers 11-4 in the third.

A basket by Senior Alex Hoeffel put the Pirates up by 4, 34-30. A 3 and a basket by the Pirates surrounded a Hoeffel free throw to make it 35 all. The Pirates would score the next 5 points as Prowant would hit a 3 and Hoeffel a pair of free throw for a Pirate 40-35 lead. The Tigers would finish off the nights scoring on a 11 point run to emerge as the 46-40 winner.

Catelyn Etter led the Pirates with 14 points while Madelyn Potts added 8. Addy Armey put in 7, Kerri Prowant 6, and Alex Hoeffel 5. The Pirates made seven 3s while the Tiigers made 6. Etter, Prowant, and Potts all mae 2 for the Pirates while Armey made 1. The Pirates were 5-8 from the line while the Tigers were 8-11.

Continental finishes at 11-12 on the season. North Baltimore moves to 13-7. North Baltimore played Kalida in the Bluffton University Sectional Finals on Saturday. The Wildcats moved onto the Ottawa Glandorf District Semifinals with a 57-27.

This puts a final stamp on the four Pirate Seniors Blue and Gold career. They were 8th grade champs. Congrats and thanks for the memories Addy, Katie, Kerri, and Alex! 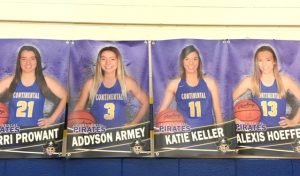