On August 19, 1962 he married Sharon Rasey. She survives in Cridersville. He was a graduate of Bryan High School, Moody Bible Institute of Chicago and Defiance College with a BA in Religion and a minor in English and teaching and Winebrenner Seminary at Findlay. He retired as a Pastor after 45 years with the West Ohio United Methodist Church Conference. He was a former member of the Lions and Kiwanis Clubs.

He was preceded in death by: a brother, Robert Hopkins and stepmother, Edith Moser.

The family will receive friends from 2:00 PM to 8:00 PM on Thursday, June 19, 2014 at the Forest Park United Methodist Church Family Life Center in Lima, Ohio. A funeral service will begin at 10:00 AM on Friday, June 20, 2014 at Forest Park United Methodist Church in Lima, OH with Rev. Ben Lowell and Rev. Tim Benjamin officiating. Interment will be in Woodlawn Cemetery, Lima, Ohio.

Memorial contributions may be made to Otterbein Cridersville or Forest Park United Methodist Church Choir Fund, under the direction of Tryna Brown.

Condolences may be expressed at www.chamberlainhuckeriede.com 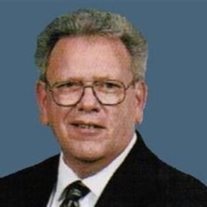