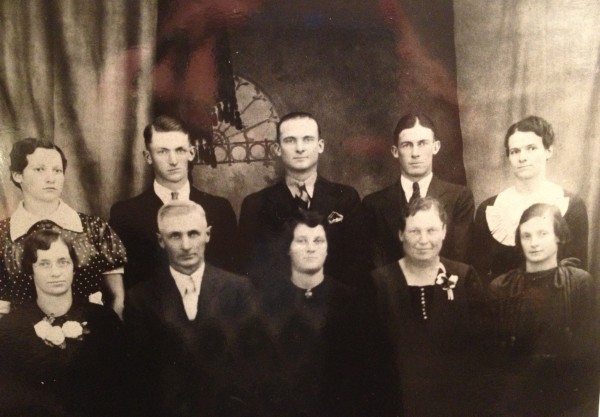 This is the second article in our series “Looking Back…Memories from Anna Mary Etter.” In 1997 at the age of 84, Anna Mary shared her memories of growing up with her granddaughter Roxy (Jones) Chivington. Anna Mary’s daughter, Jean McKibben, is sharing them with the eNews.

OUR WINTER CLOTHING
Some of our clothes were made out of boughten material or cloth flour sacks. The sacks were printed and had different designs on them. Mom would make our dresses. Usually we always had to wear long-handled underwear. The girls hated wearing them and couldn’t wait til the first of April when we no longer had to wear them. (Long handled underwear was knit underwear that was all in one piece. It had long sleeves, long legs, and in the back was a flap that buttoned at the waist.) Eventually the underwear would stretch out and fit terrible. We always had to wear brown cotton stockings. When the underwear leg would stretch out, we would have to fold them up and stuff them in our stockings.

When I was still going to the Ridenour School, I learned to sew. I saw a picture of a dress in the catalog. We didn’t have patterns then. I made my own pattern, cut it out, and made that dress. I wore a man’s tie with it. Boy, I can still remember how proud I was the day I wore that dress to school.

I was always blessed with the ability to make clothes. I never used a pattern until after I was married and had 3 girls of my own. Then I wanted the girls to be in 4-H and I was going to be the leader. Someone took up sewing and she was going to make a blouse with a boughten pattern. Well, I had never even unfolded one. So it was then, in 4-H, I learned to use a pattern. I made all the girl’s dresses. If I would go to town and see a dress I liked I would draw a picture of it and come home and make it. I never sewed for anyone else, but Marie (my sister) would have me cut patterns for her girls. I would sew up until about 10 years ago, but seldom sew now. Jean’s Note: I remember when the pant styles changed to be real tight, Aunt Sarah and Mom designed a pattern that fit without being real tight. They were so pleased they kept on making slacks of many colors (all polyester!)

Our shoes were high top shoes that were strung up. I don’t think I ever had any button shoes of my own. When I went to Cloverdale School, I had other shoes called Oxfords. They were black or brown.

When I was little, I remember having long hair. I don’t remember how I wore it, but I remember wanting to get it cut. That was the time when girls were getting their hair cut, but Mom wouldn’t let me at that time. Later, when I was seven or eight, I do remember getting my first hair cut. It was a simple bob. That’s what they called the style. We could buy ribbons that would go on a barrette to put in our hair.

Being the third daughter out of five girls, I never got new clothes. I always got hand-me-downs from Sarah and Marie. I never had a new coat. Then one year when I was about five or six years old Mom got me a new coat for Christmas. That year, as we always did, us kids would get nosy at Christmas time and look down through the register. I got caught when they were putting the Christmas stuff out and I didn’t get that new coat. Mom waited a month or so before she gave it to me. She had wanted to surprise me. I never looked down through the register after that! That taught me a lesson!