Marvin “Ike” A. Conkright, age 92 of Continental, Ohio, peacefully passed away on Monday evening,  June 21, 2021 at his daughter’s home in Defiance.

Ike was a faithful member of St. Joseph Catholic Church in North Creek, Ohio, and recently at St. Nicholas Catholic Church in Miller City. He worked as a Metallurgist for General Motors for over 45 years until his retirement in 1993. Ike was very active in Harness Racing and belonged to The Ohio Harness Horseman’s Association and U.S. Trotting Association. He owned and trained several horses through the years. He was a member of The American Chianina Association, and was Putnam County Special Deputy and a Putnam Co. Fair Board Member. Ike was a Boy Scout Leader and 4H Advisor to “We Mean Business Club”. He also belonged to Coon Hunter’s Association in North Creek, The Cattle Club, and North Creek Snowmobile Club. His memberships also included K of C, AmVets, VFW, American Legion, Eagles, DAV, Moose, and the Elks. He enjoyed dancing, wine making, and “just loving life”. Ike was loved and respected by his family and many good friends and colleagues.

In addition to his parents, he was preceded in death by his wife Patricia Conkright, son, Dave Conkright, granddaughter, Melanie Good, great-grandson, Karson Botek, his brother, Jim Conkright, and his sisters, Mildred Warnimont and Doris Icenogle.

The family will receive friends from 3:00 to 8:00 pm on Monday, June 28, 2021 at Schaffer Funeral Home in Defiance, and from 12:00 to 1:00 pm prior to services at the church on Tuesday. Due to CDC guidelines, if you are not fully vaccinated, a mask is required to enter the funeral home. A Mass of Christian Burial will be held at 1:00 pm on Tuesday, June 29, 2021 at St. Nicholas Catholic Church in Miller City, with Fr. James Morman officiating. Burial will  follow the service at St. Joseph Catholic Cemetery in North Creek Ohio with graveside military honors. 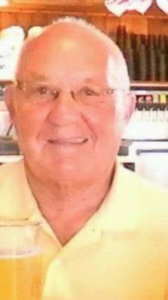