Patty was a nurse and nurse’s aid for a total of 38 years, most recently at Pine Rest Christian Services. She loved nursing and was well liked and remembered by both patients and their families. Her father, Ken Williamson, preceded her in death. A loving wife, mother, daughter and friend, she will be deeply missed by her husband, Richard; her children, Ethan (Veronica) Dickson, Kyra Dickson, Derik Dickson; her mother, Pat Williamson; three brothers and four sisters; several nieces and nephews.

The funeral service will be held 10 A.M. Saturday, January 11, at Heitmeyer Funeral Home, Continental, Ohio, with Pastor Timothy Dearborn officiating. Interment will be in Fairview Cemetery, Dupont Ohio. Those wishing may give donations to a charity of your choice. The family will greet visitors on Friday January 10, 2014 from 2 to 4 and 6 to 8 P.M. at the Heitmeyer Funeral Home, Continental, Ohio. Condolences may be expressed at www. heitmeyerfuneralhome.com. 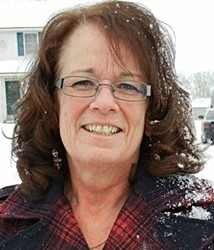