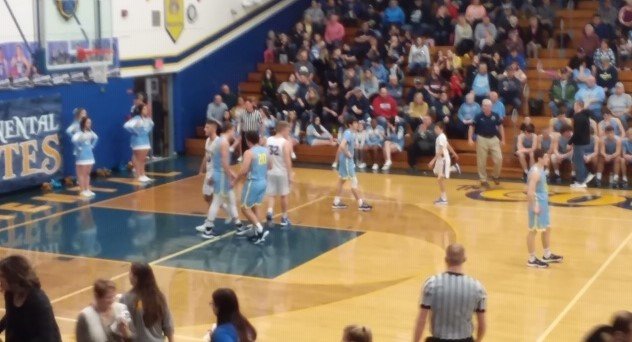 Three 8+ point runs in the second half was the difference in the Ayersville – Continental Boys basketball game at the Cove on Saturday. The first half went the Pirate way but it was all Pilots in the second half. Gavin Huff got the Pirates scoring started by hitting the first basket of the game. The Pilots would rally by putting in a pair of baskets to make it 4-2 Pilots. The two teams would exchange baskets twice with Huff putting in both for the Pirates, 8-6 Pilots. The Pirates score the next 5 points with Gannon Prowant scoring 4 and Rhenn Armey 1. Pirates 11-8. The Pilots would make a pair of free throws for a 11-10 Pirate lead after 1.

The Pilots would gain a 1 point lead when they put in a basket to start the second quarter. Pilots 12, Pirates 11. A free throw by Bryce Recker and a basket by Mitchel Coleman put the Pirates up by 2, 14-12. After a Pilot basket to tie, Alex Sharrits put the Pirates in the lead with a 3, 17-14. The teams then traded baskets with Prowant hitting for the Pirates. A basket by the Pilots was followed by an Armey 3 to finish up the half’s scoring. Pirates 22, Pilots 18 at the break.

The two teams exchanged 2 points at the start of the second half with Coleman hitting a pair of free throws for the Pirates. Pirates 24, Pilots 20. The Pilots would then put together a 9 point run to take a 29-24 lead. The Pirates would regain the lead 31-29 as Coleman would start the run hitting a 3 and Huff and Reed Warnement putting in baskets. That would be the last lead of the night for the Pirates as the Pilots would finish the quarter with the last 5 points. Pilots 34, Pirates 31 after 3.

The Pilots would open up the fourth quarter by hitting a 3 to make it a 37-31 Pilots lead. A basket by Huff and a free throw by Coleman would cut the Pilot lead to 3, 37-34. The Pilots would put together an 8 point run to open up an 11 point lead 45 -34. The Pirates would outscore the Pilots 6-4 but that was not enough to win. Pilots 49, Pirates 40 final.

Gavin Huff led the Pirates with 14 points while Mitchell Coleman had 8. Rhenn Armey, Reed Warnement, and Gannon Prowant all had 4 points, Bryce Recker and Alex Sarrits both had 3. The Pirates made three 3 point shots with Coleman, Armey, and Sharrits all hitting 1. The Pilots hit two 3-pointers. The Pirates hit 7-14 from the line while the Pilots were 11-13 including 6-8 in the fourth quarter.

The Pirates fall to 3-11 and will host Fort Jennings on Friday in a Putnam County League game and Veteran – Military Appreciation Night. The Pilots improve to 4-6. Continental took the Junior Varsity game 36-23.

It was Mini-Cheer night as a floor full of Mini-Cheerleaders provided half time entertainment with Cheers during the Junior Varsity game and a dance routine during the Varsity game. Great Job Girls!