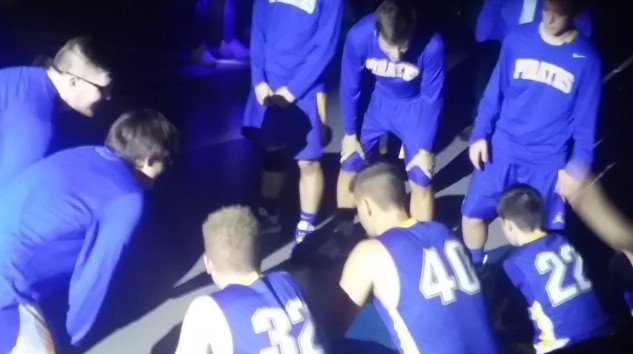 Saturday host Lima Temple Christian led at all the quarter breaks except the last one, and that is the one that counts. Continental Boys Basketball rallied in the fourth quarter to take home the 10 point win. Pirate Gavin Huff put the Pirates on the board first with a basket only to have it matched by the Pioneers. Another Huff basket put the Pirates back up by 2. A 3 and a free by the Pioneers made it 6-4 early in the game. Mitchell Coleman would tie the game at 6 with a basket. The Pioneers would make a 3 to close out the first quarter scoring at 9-6.

The Pioneers would make the first basket of the second quarter to make it a 5 point lead 11-6. Coleman would bring the Pirates within 2 with a basket and a free throw. Pioneers 11- 9. The Pioneer would put in a 3 and a basket to open up a 7 point lead 16-9. Pirate Andrew Hoeffel ended the half’s scoring with a basket. Pioneers 16, Pirates 11.

The Pirates and Pioneers started the second half with the two teams trading points. Twice a pair of Pioneer free throws were followed a Pirate basket (1 by Huff and 1 by Bryce Recker). Pioneers 20, Pirates 15. After a Pioneer free throw the Pirates would put together an 8 point run to take their first lead since early in the game. The Pirate run was fueled by a Huff basket, a pair of baskets by Coleman, and a Trevor Brecht basket. Pirates 23, Pioneers 21. The Pioneers would regain the lead with a pair of 3 pointers. Pioneers 27, Pirates 23. Brecht would make it a 2 point game by making a basket. Pioneers 27, Pirates 25 after 3.

Mitchell Coleman led the Pirates with 14 points while Gavin Huff added 10 and Trevor Brecht 8. Rhenn Armey had 4, Andrew Hoeffel 3, and Bryce Recker 2. Continental did not make a 3 point shot while Temple Christian made 6. The Pirates were 9-12 from the line (8-10 in the fourth quarter). The Pioneers were 7-14 from the line.

Continental improves to 1-1 with the win and will travel to Hicksville on Friday for a non league game. Lima Temple Christian falls to 0-2.