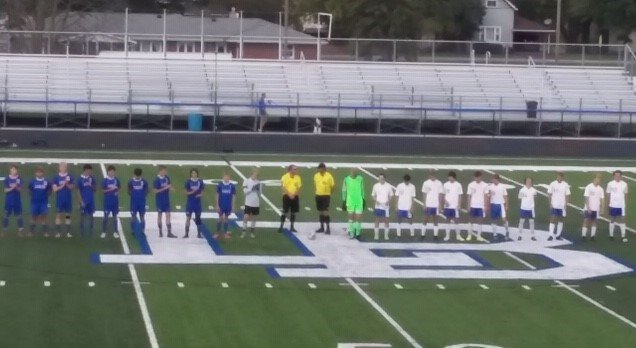 Saturday saw Continental High Boys travel east to take on Liberty Benton.  In a rough and tumble game that featured 5 cards and a penalty kick the Pirates emerged victorious.  Scoring action a little over 10 minutes into the game as Rhenn Armey dribbled to center and shot from the 18 that went left of the goalie for the score.  The Eagles would tie the score at 1 a little over 9 minutes later as they converted a pass to the center for a shot from the 15 that beat the Pirate goalie.  Thing got interesting after that as a tackle at the Pirate 25 resulted in a bloodied Eagle, an Eagle red card and yellow card.  1-1 draw at half along with a second yellow card.
Continental went ahead on a made penalty kick by Armey 40 seconds into the second half.  Pirates 2-1. Braxton Stegbauer would make it 3-1 Pirates when he put in a centering pass from Armey.  The second half showcased the abilities of both goaltenders as the both made great saves to hold off the opposition.  In the last 10 minutes of the game both teams picked up a yellow card.  Pirates 3-1 final.
Rhenn Armey led the Pirates with 2 goals and an assist.  Braxton Stegbauer had 1 goal.
Konnor Knipp Williams was in the goal for the Pirates he made 3 saves.  Continental had 6 shots on goal to the Eagles 5.  The Pirates had 3 corner kicks to the Eagles 1.
Continental improves to 13-1-1 and will host Pettisville in the regular season final on Tuesday.  This game will be Senior night so get there early.  Liberty Benton is now 7-4-3.
With the 2 goals Rhenn Armey establishes a new season goal record for the Pirates.  Armey has 33 goals on the season the old goal was 31 set by Armey last year.  The Pirate team also has established a new team season goal record besting the 2020 team with 81 goals.  The Pirates currently have 95 goals on the season.
–Mike Jones, Sportswriter