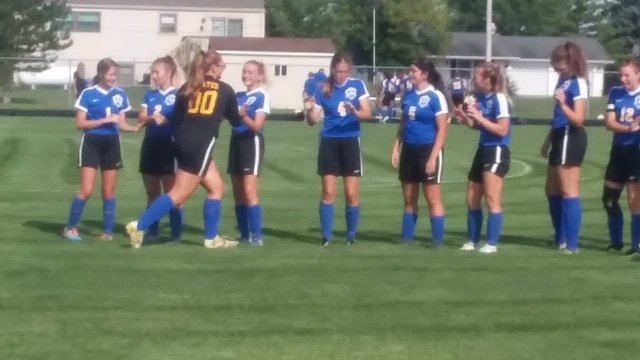 It took Continental High Girls Soccer team only 1:40 to get on the board Thursday night as they hosted Paulding in non league action.  Alex Hoeffel put the first goal in as she dribbled around the defense and put in the shot.  The Pirates would score again as Maddie Burke would punch in a Hoeffel crossing pass in front of the goal for the 2-0 lead 4 minutes later. With 27:39 left in the first half the Hoeffel put in a shot from just outside the 18 for a 3-0 Pirate lead.  Burke and Hoeffel connected again at the 24:55 mark as Burke was able to hit the back of the net off a Hoeffel pass from outside the 18.  Pirates 4-0.  Pirate Addy Armey made it 5-0 as she made a goal off a pass from sister Jensen Armey with 19:13 left in the half.  Jensen Armey got on the scoreboard when she put in a crossing pass from deep in the corner from Hoeffel with 13:37 left in the half.  Burke would get the hat trick with 10:22 left as she would put in a Hoeffel pass following a Panther goal kick.  Pirates 7 Panthers 0.  Hoeffel would end the Pirate scoring in the half as she would put in 2 more goals for the Pirates 9-0 lead at half.

The second half had the Panthers change up their defense and line up with a 2-8-1 formation.  The Pirates would solve that defensive puzzle 90 seconds in the half as Hoeffel would split the defense to make it 10-0 Pirates.  Jensen Armey would get her second goal as she took a pass over the defensive line and beat the goalie 1 on 1 to make it 11-0 with 19:16 left in the game.  McKenzy Mayes would get her first goal of the year when she split the defense to make it 12-0 with 3:39 left.  Senior Katie Keller would get on the board as she hit the back of the net with 1:38 left in the game for the 13-0 final,

Alex Hoeffel lead the Pirates with 5 goals while Maddie Burke had 3 goals.  Jensen Armey scored twice while the Pirates got single goals from Addy Armey, Katie Keller, and Mckenzy Mayes.

Other notes from the game: