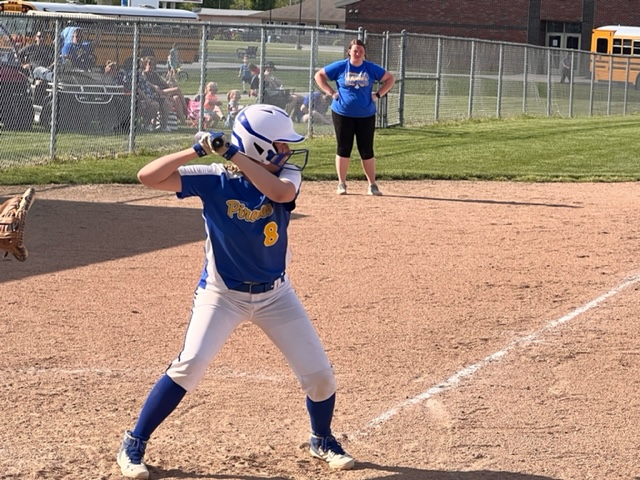 On Friday Continental Softball battled back twice to defeat visiting Kalida in Putnam County League action.  After a scoreless first the Wildcats took the early lead by plating 3 in the top of the second.  The Pirates would make it a 1 run game in the bottom of the third when they scored 2 runs.  Wildcats 3-2 after 3.  The Pirates would tie the game in the bottom of the fourth 3 all after 4.  The Wildcats would regain their lead in the top of the 5th when they scored 2 runs for a 5-3 lead.  The Pirates would take their first lead in the bottom of the 5th when they scored 3 for a 6-5 Pirate advantage after 5.  The Pirates would end the game when they would plate 9 in the bottom of the 6th.  Pirates 15-5 winner.
Alli Scott started the game for the Pirates and pitched 2 innings giving up 2 runs (1 earned) on 0 hits while striking out 2 Wildcats.  Destiny Pier picked up the win in relief as she held the Wildcats to 3 runs (1 earned) on 3 hits while striking out 2 Wildcats in 4 innings.
Continental pounded out 18 hits in the game including 7 extra base hits.  Destiny Pier was 3-3 from the plate with 2 singles and 1 double, 3 runs scored, 2 RBIS and 1 walk.  Reese Knowles was 5-3 with 1 run scored and 3 RBIs.  Raegen Clemens went 5-2 (1 triple) and scored 2 runs and had 3 RBIs.  Mace Cordes went 2-3 (double, triple) scored 2 and had 1 RBI.  Madison Rayle went 2-4 (double) with 2 runs scored and 2 RBIS.  Alli Scott went 2-2 and also got 2 walks.  Lauren Williams went 2-4 (2 doubles) and scored 2 run and had 2 RBIs.  Tristi Woodin went 2-3 scored 2 runs and had 1 RBI.
Continental improve to 2-12 (2-3 PCL) and will travel to Ottoville on Saturday for a non league game.  Kalida falls to 0-13 (0-5 PCL).
This was the final home game for the Pirates Softball and Seniors Letizia De Pietro and Madison Burkhart were honored.  Good Luck Seniors in the future.
–Mike Jones, Sportswriter