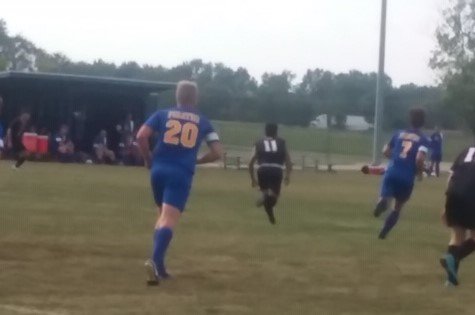 Last year Continental and Lima Central Catholic Boys Soccer team met in the 2019 Lima Bath Kickoff Classic with the Pirates pulling a 1-0 win to claim the title. 2020 had the Pirates and Thunderbirds in a rematch in the Semifinals. It took the Pirates a little over 2 minutes to match their 2019 goal total as Rhenn Armey hit the back of the net from a Wyatt Davis pass. Andrew Hoeffel would intercept a Tbird pass then pass it to Armey who returned the pass to a Hoeffel streaking down the middle. Hoeffel then beat the goalie to make it 2-0, 9 minutes into the game. Armey put in his second goal when he converted a crossing pass from Weston Okuley Pirates 3-0, 14 minutes into the game. Warrin Okluley too a pass from Armey and floated it over the goalie fr a 4-0 Pirate lead halfway through the first half. With 15 minutes left in the half Alex Sharrits got on the board for the Pirates when he pushed the ball past the Tbird goalie 5-0 Pirates. Sharrits hit the back of the net 5 minutes later when he converted a pass from Armey. Pirates 6, Tbirds 0 at half.

Armey got the hat trick 2 minutes into the second half when he put in a Westin Okyuley pass. Sharrits completed his hat trick 3 minutes later scoring on a Noah Bibler pass. Wyatt Davis made it 9-0 when he converted a PK. The Tbirds would get on the board with 28 minutes left when Michael Taflinger beat the Pirate defense. Peyton Wilson put in his first Pirate goal with 23 minutes remaining. Westin Okuley put in the 11th Pirate goal on a pass from Wyatt Davis. Pirates 11, Tbirds 1 final.

Pirate Goalie Konnor Knipp-Williams had 5 saves while the Tbird goalies combined for 13 saves. Continental had 5 corner kicks while LCC had 3.

Continental is now 1-0 and will take on host Lima Bath in the Kickoff Classic Final on Tuesday Aug 25 at 7 pm. LCC plays Paulding in the other game at 5. Bath moved to the finals with a 8-0 win over the Panthers.