A tale of two conferences.  Pandora Gilboa will play Friday for a share of the Blanchard Valley Conference crown; win and it is theirs.  On Thursday night the Rockets traveled to Continental needing a win to stay out of the Putnam County League basement.  They did not win.  The host Pirates used a 9 point advantage in the third quarter to claim the victory.  The Pirates opened up the game by taking the first quarter 13-10.  The Pirates took the second quarter by 2 for a 23-18 lead at half.  It was all Pirates in the third as they took the quarter by 7 and a 41-29 lead into the fourth.  The Rockets would take the final quarter 11-9 but it was the Pirates who emerged the victors 50-40.

Continental was led in scoring by Senior Mitchell Coleman with 23 points while Gavin Huff added 19.  Alex Sharrits scored 4, Rhenn Armey and Senior Bryce Recker 2 each.  Coleman made three 3 pointers for the Pirates while Huff made 1.  The Rockets made 4 three pointers.

Continental improves to 8-13 (2-5 PCL) and finishes in a tie for fourth with Miller City (Ottoville 7-0 was the PCL Champ).  Pandora Gilboa is 10-11 (1-6 PCL) and is tied with Fort Jennings for 7th in the PCL.  Pandora Gilboa is 7-2 in the BVC and is a 4 way tie for first.  The Rockets play one of the co-leaders Riverdale on Friday for the BVC crown.

Continental will start their tournament trail on Tuesday when they travel to Kalida for an OHSAA Division IV Elida District Sectional Semifinal.  Continental was seeded 9th at Elida while Kalida was seeded 4th. 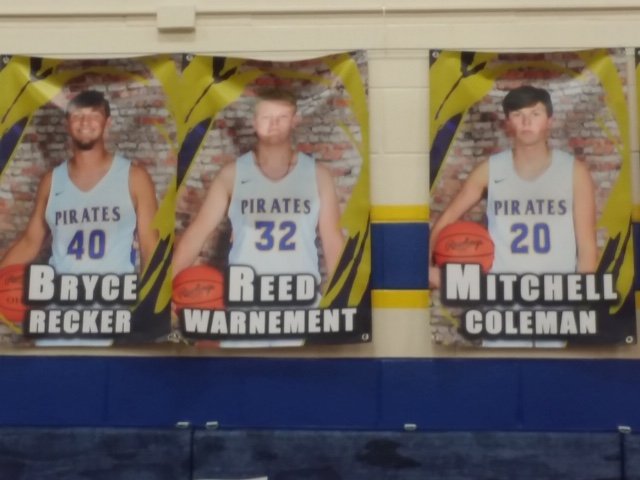