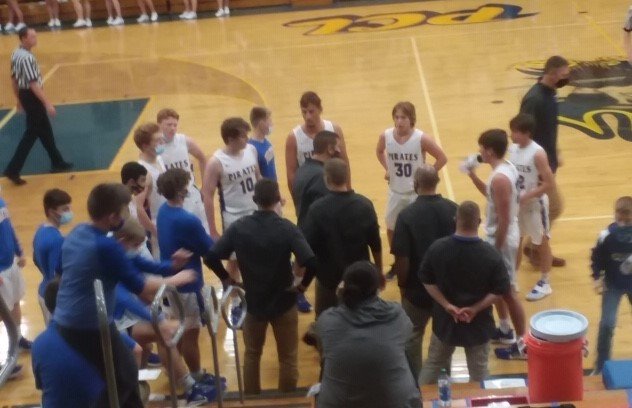 On Saturday Continental High Boys Basketball and Lima Temple Christian game was decided by a Pirate 16-4 advantage in the second quarter.  The Pioneers started the game out by hitting a pair of baskets for a 4-0 lead.  Pirate Gavin Huff hit a pair of free throws to cut the early margin to 2.  A Pioneer basket was followed by Huff hitting a 2 then a 3 to give the Pirates a 7-6 lead.  A made free throw by the Pioneers made it 7 all after one.  Pirates Mitchell Coleman and Rhenn Armey started the second quarter by putting themselves in the 2020-21 scorebook when Coleman would make a basket and Armey a 3 to give the Pirates the lead for good 12-7.  A Pioneer 3 point play was followed by a Pirate 6 point run (2 free throws by Huff, 2 free throws and a basket by Coleman) to open up a Pirate 18-10 advantage.   A free throw by the Pioneers would finish their point total for the half at 11 while the Pirates would get a 3 from Huff and a basket from Coleman for a 23-11 halftime Pirate advantage.

The second half would see the Pirates offense continue to roll as they put in the first 7 points of the half (a pair of free throws by Armey, a 3 point play and a basket by Coleman) to stake the Pirates to a 30-11 lead.  The Pioneers would score 7 of the last 9 points of the third to make it 32-19 after 3.  The Pirates would win the fourth 9-7 for a 41-25 final.

Mitchell Coleman led the Pirates with 18 points while Gavin Huff put in 5.  Rhenn Armey put in 5 and Bryce Recker had 3.  Huff made two 3 point baskets for the Pirates while Coleman had 1.  The Pioneers made one 3 point attempt.  Continental out-rebounded Temple Christian 27-13 and won the turnover battle 10-11.

Pirates are now 1-1 and will host Hicksville on Friday.  Lima Temple Christian falls to 0-1.