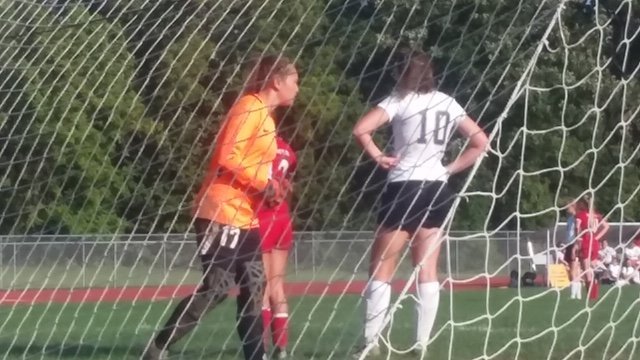 On Tuesday Continental High Girls Soccer team headed North to take on Wauseon in Non league action.  Last year the Pirates won the game 10-0 but this year a much improved Indians team took to the pitch.  The Pirates had the first try for a goal when a shot by Addy Armey went just over the goal at the 36:53 mark.  The Indians would convert their first shot when a crossing pass found 2 Indians against the Pirate goalie and the Indians put their shot in the back of the net.  Both teams would have numerous tries that would just miss but it would be the Pirates who would convert with just 38 seconds left in the half.  Jensen Armey would put in the goal for the Pirates as she followed up an attempt by Alex Hoeffel and put it past the goalie.  That would be the last goal of the half Pirates Indians 1-1.

Action slowed in the second half as both teams defense got a better feel for the opposition and field conditions (grass was long and field was soft.. so a lot of balls normally that would be out stayed in).  The Indians just missed taking the lead with 18:30 left when a shot went over the goal.  Hoeffel would put the Pirates in the lead for good with a shot from the 15 off a Jensen Armey pass.  Pirates 2-1.  That would it for the scoring for the night.  Pirates 2, Indians 1 – final

Alli Scott was the goalie for the Pirates in the win.

Continental improves to 2-1 and will host Delphos Jefferson on Saturday in non league action.  Wauseon is now 1-3.

With this goal Alex Hoeffel now has 135 goals in her Pirate career.  This is good for a tie for 7th place in the OHSAA Girls Soccer Career goal list.