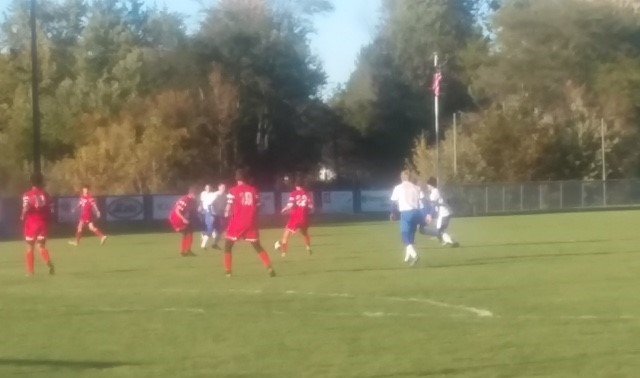 On Wednesday a pair of Pirate teams got together to play on the Kalida Pitch to decided who would advance to the Division III District Finals. Bluffton, #1 seed of the district, had advanced to the District semifinal by dispatching Lincolnview 5-0. Continental #4 seed had upset #3 seed Ottoville in their District Semifinal 1-0. The first half started with Bluffton controlling the action for most of the half. A pair of Continental counterattacks would not yield shots. Bluffton took a 1-0 at the 13:36 mark when they hit a strong shot from the 18. That would be the only score in the first half.

The second half had the Pirate goal Trevor Brecht making some outstanding saves to keep the score close. At 26:50 left in the game Bluffton appeared to take a 2-0 lead but the goal was not allowed due to a handball that resulted in a yellow card for Bluffton. At 21:54 Bluffton did get their second goal of the game – they brought the ball down the right side of the field and had a centering pass in the middle of the Penalty Box that resulted in a clear shot to the goal. Continental did have a great opportunity to make it a 1 goal game at 15:53 when their shot glanced off the Bluffton goalie into a swarm of players that ended with the ball hitting the outside of the goal post and going wide. Bluffton 2, Continental 0, final.

Continental falls to 9-8-2. Bluffton improves to 12-2-4 and will play Kalida in the District finals on Saturday.