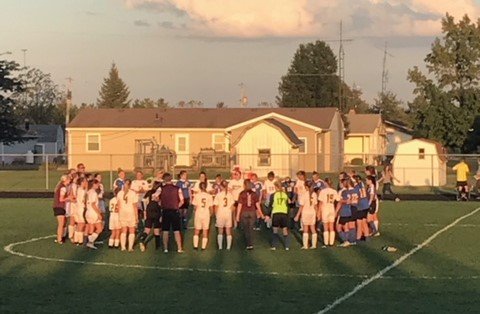 On Tuesday the question to be answered was would there be a sole Putnam County League Girls Soccer Champion or would the crown be shared. The answer, shared. Kalida entered the game at Continental 1 game behind the Pirates in the standing. A Wildcats loss or tie would have given the Pirates the sole crown. But on this day the Wildcats bested the Pirates for the title share. A 6 minute span in the second half proved to be the Pirates undoing.

The first half had the Pirates make the first attempt to score when Alex Hoeffel shot was deflected away by the Wildcat goalie. Kalida attempted to strike back at the 33:00 mark when four attempts at the goal were stopped by the Pirate defense. The two teams traded shots with Kalida controlling the action but the Pirates had a strong counterattack that put the ball all around the net just not in it. The first half ended with a 0-0 tie.

The second half started the same as the first with Continental getting a great opportunity to score only to have the Wildcat goalie deflect the ball just wide of the post. Kalida was the first to put one in the net when a shot from the 19 made it through the Pirate defense with 33:40 left in the game. A missed Pirate opportunity to tie was met at 27:38 when Kalida scored a second goal off a throw-in that bounced away from the Pirate goalie onto a Wildcat foot for the goal. The final minutes of the game had the Wildcats controlling the action that ultimately led to their third goal with 1:45 left in the game. The Pirates were not to be shutout in this game as Hoeffel made a strong move to the goal with 10 seconds left and was knocked off the ball with 5 seconds left. The Wildcats were called with a penalty and Hoeffel hit the corresponding penalty kick. Wildcats 3, Pirates 1.

Continental falls to 11-4-1 (3-1 PCL) and will host Delphos St Johns on Saturday. Come out to the game early for Senior Day festivities. Kalida improves to 11-4-1 (3-1 PCL). The two PCL rivals are in different districts this year so a rematch would have to occur in the regional semifinals.