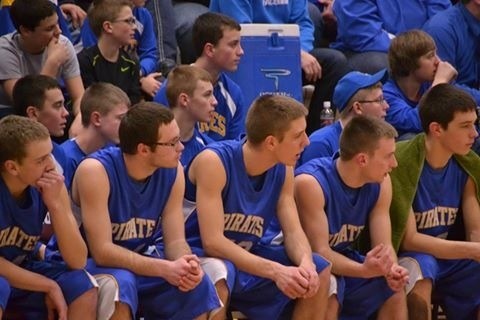 The 10th ranked Wayne Trace Raiders (18-4) provided the opposition for the Pirates (11-13) in the Division IV Paulding Sectional Final. A close game at the start, the Raiders opened up a 3 point lead at the end of one quarter of play, 14-8. The Pirates then scored 10 of the first 14 points of the second quarter to tie the game at 18 all. The Raiders scored the last 8 points of the 2nd quarter and the first 2 of the 3rd to open up a 10 point 28-18 lead early in the third. The Pirates battled back to reduce the Raider lead to five, 30-25 later in the third. The Raiders scored the last 4 points of the 3rd for a 34-25 lead. The fourth quarter had the Pirates outscored 24-15 for the 58-40 Raider final. The Pirates were lead by Freshman starters Wade Stauffer (14 points) and Jacob Williams (11 points). Hats off the Pirate defense for holding Wayne Trace 0-13 from 3 point land.

A big thank you goes out to the Senior Class whose leadership helped turn a 5-12 season into a 11-13 with a 6 game winning streak. Matthew Bracken , Adam Lawhorn, Austin Mansfield, Vernon Prowant, and Tyler Rue make up this years’ Senior Pirates. Thanks also goes out to Senior Cheerleaders Tia Escamilla and Regan Cunningham.