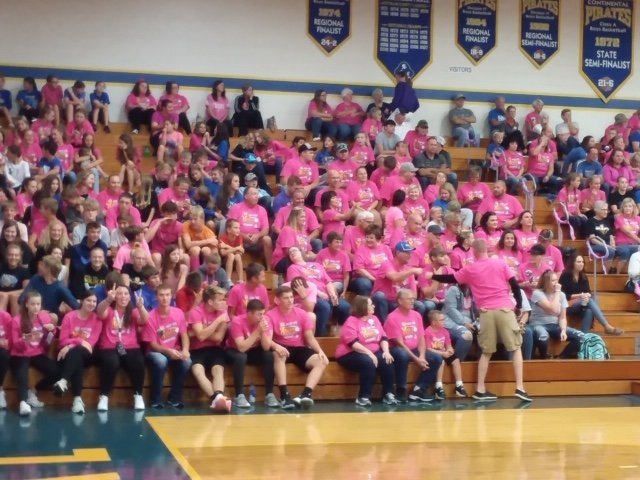 On Saturday night a large crowd at the Cove for Volley for a Cure as Continental hosted Miller City in Putnam County League action.  Both teams arranged for numerous raffle baskets, cake raffle, bench raffle and sales of a bunch of shirts in support of the fight against cancer.  Great Job.  This was also Senior night for the Pirates as Seniors Kenna Okuley and Annkia Bowers were recognized.
The night started off with the Pirates gaining the first point only to have the Wildcats run off the next 5. The Pirates would make it a 5-4 game off the serves of Macie Cordes.  The teams traded points and then it was Continental regaining the lead on Senior Kenna Okuley;s serves.  Pirates 8-7.  The Wildcats would roll off the next 9 points to take control of game 1.  Wildcats 25-11 game one.
Game 2 had the Wildcats roll off the first 14 points enroute to a 25-13 win.  Game 3 also went to the Wildcats 25-5.
Continental moves to 2-17 (0-5 PCL) and will travel to Paulding on Monday.  Miller City improves to 15-3 (5-0 PCL).
Congratulations to Pirate Seniors Kenna Okuley and Annika Bowers on a well played regular season.  Good luck in the Tournament.
–Mike Jones, Sportswriter