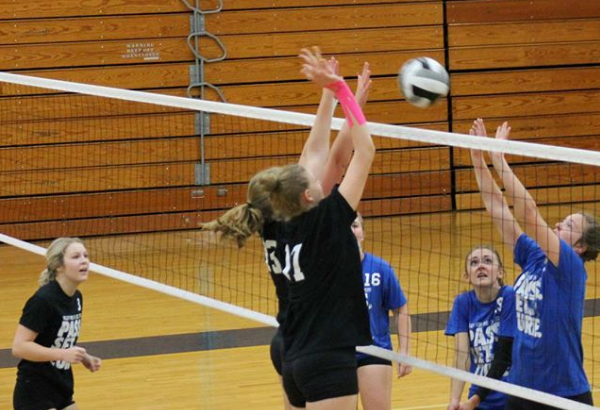 On Friday night Continental and Miller City Volleyball teams got together to raise funds to help raise money for cancer relief support in a Volley for a Cure match.  Miller City entered the match undefeated in the Putnam County League and with an impressive 17-2 record.  The first game started out with the two teams trading points with the Wildcats opening up a 3 point lead 10-7.  The Wildcats would extend the lead to 15- 9 when the Pirates came back with 5 service points from Tygre Troyer to tie the game at 15.  The game went to 16 all when the Wildcats would grab control with a 4 service point run on to a 25-21 game one win.

The second game started out the Pirates way as they opened up to a 3-1 lead and expanded that lead to 9-6 later in the match.  The Wildcats would tie the game at 10 and then take control of the game as they would go on a 8 point run to make it 18-13.  The Pirates would get one more point to make it a 25-14 final.

The third looked like a Wildcat rout at the beginning as they opened up an 8-1 lead.  Slow but sure the Pirates got back into the game and took the lead when Madelyn Potts served a 3 point run for a Pirate 14-12 advantage.  The Wildcats would finish the night off outscoring the Pirates 13-4 for a 25-18 final.

Madelyn Potts had 23 digs for the Pirates while Mackenzie Rayle had 19 assists and 13 digs.  Kennedy Hiltner had 17 digs and 8 kills.

Over $2000 dollars were raised for Titans Fight Together which provides assistance for 3 elementary students in the Ottawa-Glandorf school system.