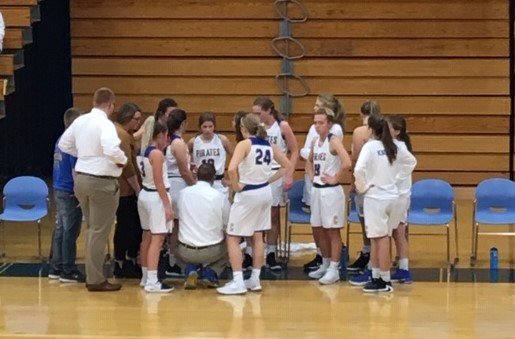 The Lady Pirates had a slow start to the season on Friday when they hosted Spencerville in the Girls Basketball season opener. Spencerville came out and held the Pirates scoreless for the first 8 minutes of the game while putting in 9. Catelyn Etter put the Pirates on the board with a pair of made free throws after the quarters end when she was fouled while shooting at the buzzer. Addy Armey opened up the scoring in the second quarter to make it Bearcats 9, Pirates 4. The Bearcats would hit a free throw and make a 3 to make it 13-4. Etter would stop the Bearcats run with a basket to make it 13-6 Bearcats. The two teams would trade baskets to make it 15 to 8 Bearcats with Etter scoring for the Pirates. A 5 point run by the Bearcats would end the half at 20-8.

The second half started out the Pirate way as Kerri Prowant opened up the third quarter with a basket to make it a 10 point game 20-10. A Bearcat 3 point play and basket made it 25-10. That run was stopped when Etter hit a pair of free throw 25-12 Bearcats. A pair of Bearcat baskets was followed up the Pirates with a made free throw by Alex Hoeffel and a basket by A Armey made it 29-15 Bearcats. Four more Bearcat points would be followed by an Etter 3 to make it a 14 point Bearcat advantage. The Bearcats would put the game away as they went on a 10 point run to make it 39-18 after 3. The Bearcats outscored the Pirate by 2 in the fourth quarter to make it a 54-30 final.

Catelyn Etter led the Pirates with 11 points while Addy Armey put in 7. Alex Hoeffel had 5 points, Olivia Logan 3, Kerri Prowant and Ali Scott 2. Etter, Armey and Logan all hit one 3 pointer for the Pirates. The Bearcats hit 7.

The Pirates fall to 0-1 and traveled to Lincolnview on Saturday for a non league game. Spencerville is 1-0. Spencerville won the Junior Varsity game 36-12.