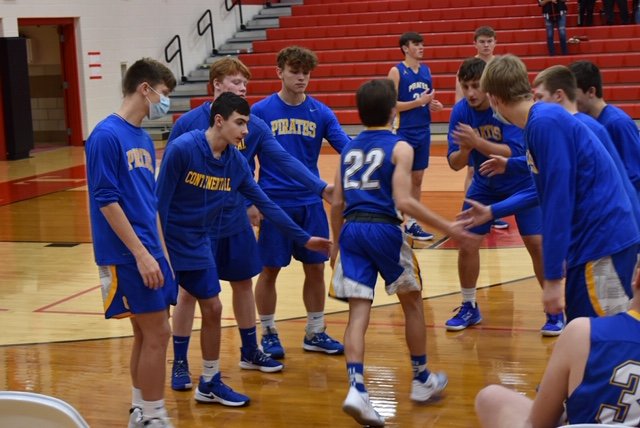 A last minute cancellation by Cory Rawson changed the Bluffton McDonalds Holiday Tournament on Tuesday as Continental played Bluffton in the only game of the night.  Bluffton and Arlington were to play on Wednesday.  The game was close for most of the first half but a Bluffton 18 point run spanned the halftime turned the games fortunes.
Bluffton hit a pair of free throws to start the scoring while a Reed Warnement basket tied the game at 2.  A 7 point run by Bluffton would give them the lead for good at 9-2.  Continental would stop that run with a Mitchell Coleman 3 to make it 9-5. A pair of 3s by Bluffton would open up a 10 point lead 15-5.  At this point in the game Bluffton had made four 3s and 3 free throws.  Andrew Hoeffel had his own 8 point run (two 3s and a pair of free throws) to pull Continental within 2, 15-13.  The first 2 point basket by Bluffton would be followed by a Coleman 3 to make it 17-16 Bluffton.  Both teams would close the quarter scoring with a basket with Gavin Huff scoring for Continental.  Bluffton 19-18 after 1.
Bluffton would open up the second quarter by hitting the first 7 points to take a 26-18 lead.  Continental would put up the next 6 points on a pair of Coleman 3s Bluffton 26-24. Bluffton got a 3 and a free throw to make it 30-24.  A Rhenn Armey basket would make it a 4 point game and Continental would follow up a Bluffton free throw with Bryce Recker basket to make it a 3 point game 31-28.  A Bluffton 3 was followed up by a Coleman pair of free throws 34-30 Bluffton.  Bluffton would score the last 5 points of the half for a 39-30 lead.
A change in defense by Bluffton would lead to offensive trouble by Continental as Bluffton would put in the first 13 points of the third quarter to take a 52-30 lead.  Continental scored the last point of the quarter as Konnor Knipp-Williams would make a free throw.  Bluffton 52 -31 after 3.  Continental managed to score 9 points in the fourth quarter while Bluffton put in 16.  Bluffton 68-40 final.
Mitchell Coleman led Continental with 19 points while Andrew Hoeffel put in 8.  Rhenn Armey scored 4, Konnor Knipp Williams 3, Gavin Huff, Bryce Recker, and Reed Warnement 2 each.  Continental made seven 3s, 5 by Coleman and 2 by Hoeffel.  Bluffton made ten 3s.  Continental was 7-9 from the line.
Continental falls to 3-6 and will travel to Leipsic on Saturday for a Putnam County League game.  The Holiday Tournament game on Wednesday was cancelled.  Bluffton improves to 3-2.
Mitchell Coleman is now at 991 points in his career.
–Mike Jones, Sportswriter