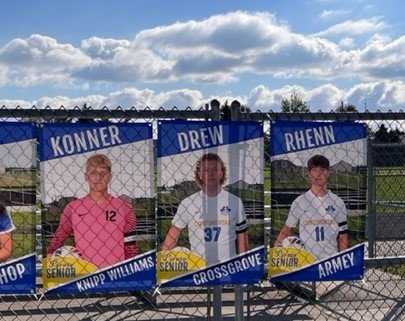 The 2022 Continental High Boys Soccer season had them claiming a OHSAA Division III Kalida District Sectional Championship.  The Pirates tournament road started with a pair of home games.  The Pirates #6 seed took out Lima Central Catholic 15-0 and Ottawa Glandorf 5-0.  A second half penalty kick by Ottoville proved to the difference in the Pirates District Semifinal.  #1 seed Ottoville entered the game without a loss but did not claim the Putnam County League title due to a pair of ties (one by Continental).  The Big Green would take the Ottoville District title with a win over #2 seed Kalida,  The Big Green would advance to the Regional Final with a win over Mansfield Senior.  Ottawa Hills ended the Big Green season at the Regionals finals 1-0.  Ottawa Hills ended up as State runner-up.  Grandivew Heights took the Division III crown.
The Pirates finished the season 13-5-5 with a 1-2-1 record in the PCL.  Kalida took the PCL title with a 4-0-1 PCL record 12-3-4 overall.  Ottoville finished second with a 3-0-2 PCL record 19-1-2.  The Pirates Seniors Rhenn Armey and  Konnor Knipp Williams left with a slew of offensive and defensive records records in goals, assists, and goalie play.
–Mike Jones, Sportswriter