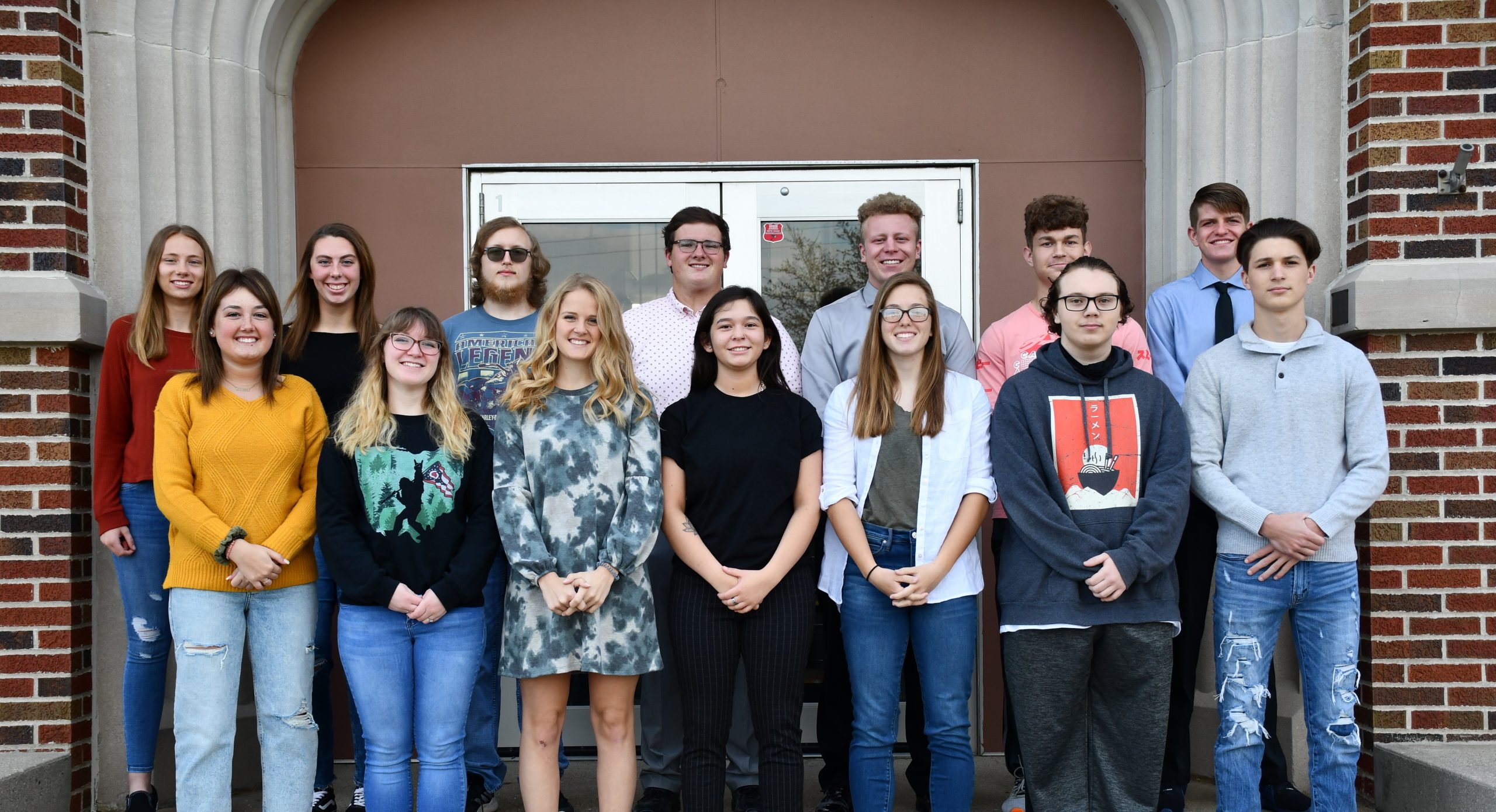 Shelby Collier is the daughter of John and Stephanie Collier. She is the vice president of the National Honor Society which she has been a member of for three years. Shelby has participated in four years of varsity soccer where she earned Putnam County League and district honors. She also participated in four years of varsity track and field where she holds the school record for pole vault and competed in the regional track meet her sophomore year. Currently she is undecided on her future plans but would like to pursue an occupation in the medical field.

Kamree Dockery is the daughter of Dwayne and Jennifer Dockery. She has maintained a 4.0 GPA at Vantage Career Center. She is a member of the National Technical Honor Society, a student ambassador, a member of HOSA, and the treasurer of her Health Technology lab. Kamree has volunteered for her community and became active by setting forth a day to pick up litter in the fields. She has volunteered at the Van Wert Historical Museum and for Sophomore Day at Vantage. Through these events she has shown great leadership and responsibility. She has been accepted to the University of Findlay for Sonography and is planning to make this her career.

Catelyn Etter is the daughter of Mark and Brenda Etter. She is a member of the National Honor Society and the National Technical Honor Society. She is also a Student Ambassador at Vantage Career Center. Catelyn has participated in four years of varsity softball, three years of varsity basketball, and 2 years of varsity volleyball. Catelyn is an active member of the Dupont Church of the Brethren. She plans to attend the University of Northwestern Ohio to become a Registered Health Information Technician. While attending the University of Northwestern Ohio, she will be playing basketball.

Isaac Gibbs is the son of David and Shonda Gibbs.

Connor Maag is the son of Barb and Eric Maag. He has kept a 4.0 GPA throughout his high school career and has been in many college credit plus classes. He’s the senior class president and has been the class president for the previous three years also, and is the National Honor Society president. Connor has been in many different Continental drama department play and musical productions, and has been involved in many different band activities, including pep band, jazz band, concert band, marching band, solo and ensemble, county honor’s band, and a community orchestra. He also has been in track and quiz bowl for the last four years. Connor plans on attending the University of Toledo to major in electrical engineering.

Curtis Mansfield is the son of Kip and Jeannie Mansfield. He attended Vantage Career Center and was in the Industrial Mechanics program. Curtis was a student lab assistant and a member of the varsity track and field team. He enjoys hunting, working on cars, riding four wheelers, hanging out with friends and family, and throwing discus. Curtis is a member of the Dupont Church of the Brethren and Xperience Church. He also volunteers at the Defiance Dream Center on Saturdays to work on cars. Curtis currently works at Insight Equipment and plans to attend UNOH specializing in Diesel Technology.

Westin Okuley is the son of Chad and Jen Okuley. Westin has participated in four years of varsity soccer where he has earned Putnam County League honors and district honors. He plans to attend college majoring in business in the fall.

Madelyn Potts is the daughter of Dennis and Tracy Potts. She is a member of the National Honor Society and a member of the Saint John the Baptist Catholic Church youth group. Madelyn has participated in three years of varsity volleyball while accomplishing a high goal of 1000 career digs. She also participated in four years of varsity softball, basketball, and cheerleading. She has earned Putnam County League honors for her athletics. Currently Madelyn is a full time College Credit Plus student at Bowling Green State University. Madelyn plans on attending Bowling Green State University, majoring in Early Childhood Education and Intervention Specialist.

Sierra Salinas is the daughter of Nick Salinas and Peggy Newsome. She is the senior class vice president. Sierra participated in four years of varsity soccer. Sierra is a member of National Honor Society and has participated in volunteer services such as the Red Cross blood drive and volunteering at the Fort Defiance Humane Society. Sierra plans on attending Bowling Green State University and obtaining a master’s degree in forensic investigation.

Jaeger Schwab is the son of Molly Coble and Dana Schwab. He has been in the National Honor Society since his sophomore year and has been the NHS Secretary in the executive council for two years. Throughout the course of his high school life Jaeger has maintained all A’s and B’s and has been an active member in the NHS as well as an active member of the drama club his freshmen and sophomore years. Jaeger has applied and been accepted to over 15 universities and plans to be attend The Ohio State University main campus in Columbus, Ohio starting in the fall of 2021.  His main area of studies will be Business and Bio-Science

Ellie Schwarzman is the daughter of Laurie Ford and Rick Schwarzman. Ellie has been involved in band and choir her entire high school career. For choir Ellie has gone to multiple solo and ensemble competitions, receiving two superiors in singing. This year Ellie received the 4-year County Choir Award. She has also been part of the Continental Drama Department since fourth grade. Multiple awards, such as best in show and best graphic design, have been earned for her artwork. Ellie takes part in her church choir as the lead singer. She is also an NHS and Student Council member this year. Ellie plans on attending Wright State University for vocal performance.

Hunter Eric Tegenkamp is the son of Todd and Michelle Tegenkamp. He has maintained a 3.9 GPA and all A’s while attending Continental High School and Vantage Career Center. Hunter has participated in Soccer, Basketball, Track and Field, Musicals and Plays, and Quiz Bowl. Hunter is also a member of 4-H, National Honor Society, National Technical Honor Society, and Boy Scouts. While participating in Boy Scouts, Troop 229, he earned the rank of Eagle Scout. He has been a member of the Junior Fair Board and a Camp Counselor for the Putnam County 4-H program.  Hunter was chosen as the Elk’s Student of the Month and is a Student Ambassador at Vantage.  Hunter is committed to The Ohio State University, and plans on pursuing a degree in Mechanical Engineering.

Reed Warnement is the son of Chris and Tara Warnement.  Reed attends Vantage Career Center in the Industrial Mechanics Program. At Vantage he is a Student Ambassador, Vice President of Industrial Mechanics Lab and was inducted into the National Technical Honor Society. Reed is a certified welder through the American Welding Society. Reed has participated in four years of Varsity Basketball and three years of Varsity Soccer.  He is a member of the Sons of American Legion Squadron #541 and a member of the Continental United Methodist Church and youth group.  Reed has completed community service hours by helping with Community Food Pantry, park improvement projects and volunteering at the American Legion Post #541. Reed plans to attend The Ohio Fire Academy to become a full time Firefighter and Paramedic.