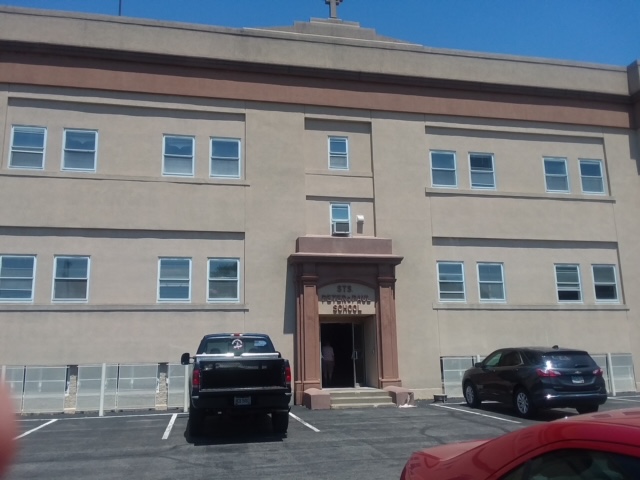 With over 100 years of students passing through the Ottawa Sts Peter & Paul Catholic Schools, a final time to walk the halls was held on Sunday June 4.  The school was built on 4th Street in 1921 to replace a 4 room school.  In 1923 a High School was started in the new building.  In 1951 a new school across the street on Locust Street was built for the High School.  The High School program was discontinued in 1961.  The school reminded me somewhat of Continental High School as when you walk through the door and the first decision is to go up or down.  Down takes you to the basement that was flooded in 2007 which provided the need for replacement.  The 2021-22 school year saw programs move to an expanded Locust Street School.  A new gym and classrooms for Kindergarten to Third was added.
If you take the stairs up you enter the classroom area where there were a number of classrooms, most with a nice cloakroom in each classroom.  Attendees at the final walk-though on Sunday were able to secure blackboards, white boards, filing cabinets, bookcases, shelving units, pull down wall maps, backboard & rims, classroom doors, interior windows and trim for a free will donation.
One more flight of stair up led one to one of the hidden gems in the 4th Street School, the Gym.  A court smaller than Continental Auditorium’s made it impossible to hit a three from the corner and most of the sideline as the court was not wide enough.  One advantage over the CHS Auditorium was there was some distance between the out of bound and the wall.  There was perhaps 3 feet separating the center court circle to the free throw circles.  The court ran east/west.  On the South side of the court was a small stage (no real seating for fans).  Behind the stage was a series of rooms.
Items were to be removed from the 4th Street School by June 15.
–Mike Jones, Feature Writer 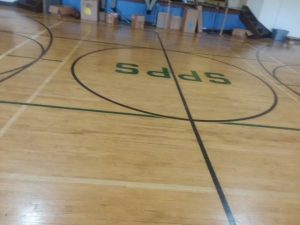 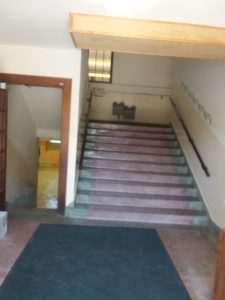 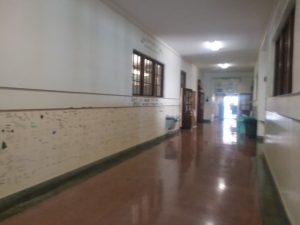