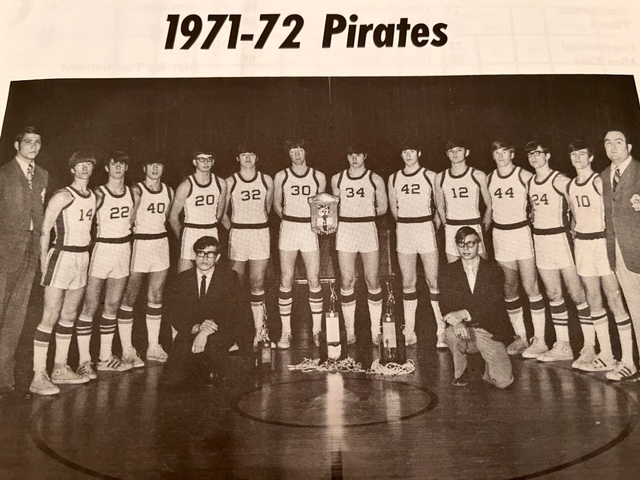 On Friday, January 14th, Continental will celebrate the 50th anniversary of the Pirates first trip to the OHSAA Boys State Tournament.  Enjoy as we look back on that special season.  You are encourage to list your memories in the comments.  Please watch for another article on the State Semifinal game against Ridgedale.
In 1970-71 the Pirates had a special season as the team claimed their first Putnam County League Championship with a 7-0 league record and went through the season with a 17-1 record.  The Pirates season would end in the Sectional Semifinals with a loss to Pandora Gilboa.  Teams on the Pirate schedule that year included final games with Oakwood (consolidated into Paulding school District) and Grover Hill and Blue Creek (who along with Payne became the Wayne Trace School District).  The game of the year had to be when Continental hosted Lima Perry where the scoreboard final had the Pirates 31, Commodores 91 cause the scoreboard could only handle 2 digits.  The 131 points by the Pirates was a Putnam County League record that still stands and the 51 points scored by Mike Schmidt is still the school record for points in a game.  Pirate faithful were hoping that the success of the PCL championship season would move over into the 71-72 season.
The 71-72 season had the Pirates practicing and playing a few home games in the Auditorium.  Most of the Pirates “home” games were played at the bigger gyms of Ottoville and Ayersville.  The home Auditorium had bleachers on the stage for the students, while the teams took up most of the first 2 rows of the other side.  Home games were tough tickets to get with lines waiting outside to get a good seat.  The Pirates replaced Oakwood, Grover Hill, and Blue Creek with the new Wayne Trace, Hicksville and a preview of state Ridgedale.  This marked the first season as Varsity coach for Don Huber as he moved up from Junior Varsity to replace Roger Renz.
The Pirates opened the season with 5 wins before falling to Ridgedale 61-56 before the Holiday break.  The Pirates were unable to win the Ayersville Holiday Tournament as the host Pilots took the championship final 76-75.  The Pirates would then move into the Putnam County League portion of the schedule. The Pirates would defeat Miller City and Leipsic and sported a 9-2 record heading into the game with Columbus Grove.  The Bulldogs would end the Pirates PCL 10 game win streak stretching over 3 seasons 81-77.  The Pirates would defeat Hicksville but lose a second PCL this time to Ottoville 68-60.  The Big Green was coached by Dick Kortokrax, who would make his mark on coaching at another place.  Ottoville would end up the PCL champ with a 7-0 record.  The Pirates would defeat Pandora Gilboa but lose the next game to Kalida 60-55.  The Pirates would close out the regular season with wins against Fort Jennings and Hilltop.  The Pirates won the Hilltop game 100-53.  The Pirates finished the regular season 12-6 and were tied for third in the PCL with a 4-3 record.
Historically Continental had not had much success in Tournament basketball so a trip to Districts would be like pathbreaking for the Pirates.  The Pirates would open up tournament at Ottawa Glandorf with a high seed and defeated Fort Jennings 84-64.  The Pirates would take on Miller City in the sectional finals, where the Pirates would cut down the nets following a close 68-65 final.  The Pirates would move onto the Lima Bath District where they were one of 3 PCL teams to advance (Ottoville (PCL Champs) and Leipsic (5th in PCL).  Lincolnview joined the District field.  Ottoville took Leipsic out 80-53.  The Pirates and the Lancers played a close game with the Pirates moving to the District finals 62-57.  The finals was a rematch of the PCL regular season game where Ottoville took down the Pirates 68-60.  Ottoville held a lead late in the game but the Pirates were not to be denied their first Regional berth Pirates 78-76 final.
Downtown Continental was a blaze of blue and gold as regional pregame talks were held around coffee at the Buccaneer (now the bar part of Clubhouse Pizza) and post game reviews held at the Peg Leg.  Regional games for Class A were held at Bowling Green State University’s Anderson Arena.  A large crowd of Pirate faithful (my family got there 2 hours before doors opened and were were not close to the front of the line) got there early to grab seats and root for the Pirates in this historic trip.  The Pirates were tasked with taking on Mansfield St Pete in one Semifinal while our rival to the North, Ayersville, took on Hardin Northern in the other semifinal.  The Spartans, the Pirates’ opponent in the Regional Semifinal were familiar with tournament success with having made it to the Regionals in 68, 69, 70, and claiming the State Championship in 68. It was safe to say the Spartans were favored.  The Pirates came out with a great game plan and took down the Spartans 70-66.  Hardin Northern dispatched the Pilots by a similar 4 point margin.  Polar Bears 52-48.
The Regional Finals were held on a Saturday afternoon and had two teams looking for their first trip to State.  Hardin Northern and Continental both had had not experienced success at this level.  The Polar Bears came in with one of their best teams and best players.  The Pirates had Sophomore Greg Spitnale, named to PCL first team, and Senior Don Brown named to the second team.  It was the Pirates who would make their first trip to Columbus as they defeated the Polar Bears 89-87.
Pirate 1971-72 State team members:  Don Brown, Larry Jones, Bob Searfoss, Jim Troyer, Frank Tegenkamp, Greg Spitnale, Ron Winkle, Ron Weisenburger, Chris Britsch, Tom Rue, Doug Simon, and  Terry Bragg.  Don Huber was the Varsity Coach with Dennis Potts being Assistant Coach.
–Mike Jones, Sportswriter