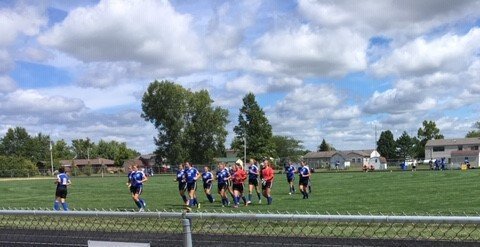 OSSCA North West  Division II #8 ranked Defiance came to the Cove on Saturday to take on the Continental Girls Soccer team in non league action.  Continental had the offensive advantage as they put in 4 goals to the Bulldogs 2.  Alex Hoeffel put in all 4 goals for the Pirates.

Continental had 15 shot on goal while  Defiance had 6.  Continental and Defiance both had 4 corner kicks.

Continental improves to 5-1 and will travel to Van Buren on Monday for non league action.  Defiance is now 2-2-2.

Hoeffel is now in sole possession of the #4 position in the OHSAA Girls Soccer Career Goal list with 145.  The # 3  position is held by Missy Gregg of Centerville and Kettering Alter with 180 goals.