Margaret was born December 20, 1932 in Benton Ridge, Ohio to the late Dwight and Rozilla (Frech) Knepper.  Bill was born March 15, 1929 in Lansing, MI to the late Oscar and Zelma (Lieb) Wells.  Margaret and Bill were married on January 7, 1951. They enjoyed 70 years together.

Survivors include their 2 children:  Victoria (Gil) Tallman of Fort Wayne, IN and Charles (Cathy) Wells of Brunswick, GA; 6 grandchildren; 15 great-grandchildren with one on the way.  Also surviving is Margaret’s sister: Doris Thompson of Findlay.

Margaret and Bill were members of the Trinity United Methodist Church in Ottawa. Margaret was a homemaker and a member of the Eastern Star. Bill retired from the Warehouse Associates, Lima and formerly worked at Libby’s in Leipsic. He was a veteran of the United States Army during the Korean War.  Bill was a 32nd degree member of the Continental Masonic Lodge, Ottawa American Legion and Ottawa Kiwanis for many years.

A joint funeral service for Margaret and Bill will begin 11:00 a.m., Saturday, December 11, 2021 at Trinity United Methodist Church, Ottawa with Pastor Cathy Davis officiating. Burial will be at a later date at Harman Cemetery, Gilboa. Visitation will be held 4 – 8 p.m. Friday, December 10, 2021 at LOVE FUNERAL HOME, Ottawa and Saturday, December 11, 2021 from 10:00 a.m. until the time of service at the church. Military rites will be performed by the Ottawa American Legion, VFW and AMVETS.

Online condolences may be expressed at www.lovefuneralhome.com. 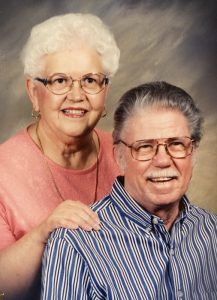