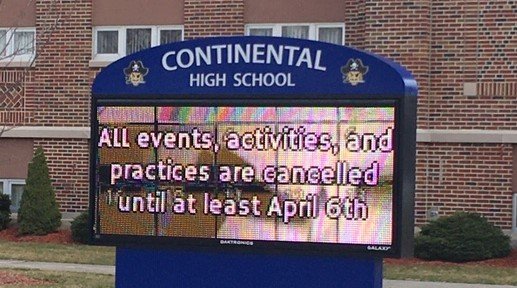 None. All OHSAA sanctioned sports for the next 3 weeks have been cancelled due to precautions taken to contain the outbreak of COVID-19. No practices or games are to take place till at least April 5. Current Spring sports schedule is:

OHSAA Winter Championship that have not been crowned have been postponed indefinitely.

On Tuesday Columbus Grove advanced to the BGSU DIV Regional finals with a win over Antwerp 55-50 in a battle of undefeated teams. In the other BGSU Regional Semifinal Parkway defeated Tiffin Calvert 44-42. This was the last games that OHSAA allowed to be played without limited attendance. There is no current plan when the DIV Regional Finals are to be played.

On Wednesday Ottawa Glandorf defeated Colonel Crawford 66-34 to advance to the BGSU DIII Regional finals. The Titans will meet Evergreen who defeated Johnstown-Monroe in the other DIII Regional Semifinals 64-54. This was the last games that OHSAA allowed to be played. The attendance was limited to each player getting 4 tickets to distribute to family members. There is no current plan when the DIII Regional Finals are to be played.

The Girls State Basketball Semifinals and Finals were all cancelled on Thursday. The DII State Semifinal between Dayton Carroll and Beloit West Branch was the first game effected by the COVID-19 cancellation as both teams were shooting around at OSUs St Johns Arena with less than 35 minutes before the game start when the announcement was made.

The State Wrestling Tournament was scheduled to occur the weekend of March 13 at OSUs Schottenshein Center but is also cancelled. Normally the Wrestling State Tournament was held the week before but it was moved back a week this year. Columbus Grove Jeff Meyer was the winner of the Troy Regional DIII 285 pound class and advanced to State.