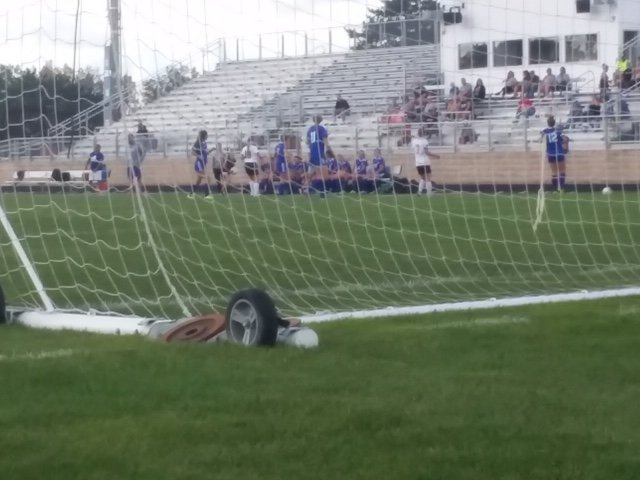 In a Saturday non league battle between two ranked OSSCA North West Ohio Division III  teams it was the Falcons who controlled the action and the game.  Visiting Riverdale show no travel ills as they opened up the days scoring a little over a minute into the game.  The rest of the first half went the Falcons way as the 4th ranked team in NW Ohio put in 3 additional goals to take a 4-0 lead into half.

Riverdale would add 2 more goals to their lead in the second half before Wyatt Davis would put the Pirates on the board with a goal off of a Rhenn Armey pass with 14:54 left.  Armey would get on the board with 1:57 left when he converted a penalty kick.  Falcons 6 Pirates 2 final.

Continental had 8 shots on goal to Riverdale’s 15.  Cody Auch made 4 saves in goal while Konnor Knipp-Williams had 5 saves for the Pirates.  Continental had 1 corner kick while Riverdale had 4.

Continental,ranked #9 in NW Ohio falls to 4-3-1 and travels to Lincolnview on Tuesday.  Riverdale improves to 4-0-2

On Saturday Continental High Volleyball played host to Hilltop in non league action.  The Cadets came out and took a thrilling first game 29-27.  The second game also went the Cadet way 25-19.  The Pirates would battle back to take the third game 25-23.  The Cadets would finish the day by taking the fourth game 25-21.

Continental falls to 3-9 and will host Lima Perry on Monday.  Hilltop improves to 9-0.

Pirates Over Rangers in Girls Soccer

After the trip to Northwood, the Continental High Girls team had to wait another 10+ minutes for the hosts to weight down the portable goal posts.  That did not delay the Pirates offense on Saturday though as Kayden Centers put the Pirates on the board a little over 7 minutes into the game.  It was then Hoeffel time as  Pirate Senior Alex Hoeffel finished up the Pirates first half scoring with 4 goals.  Pirates 5, Rangers 0 Half.

Continental improves to 6-2 and will host Bryan on Monday in non league action.