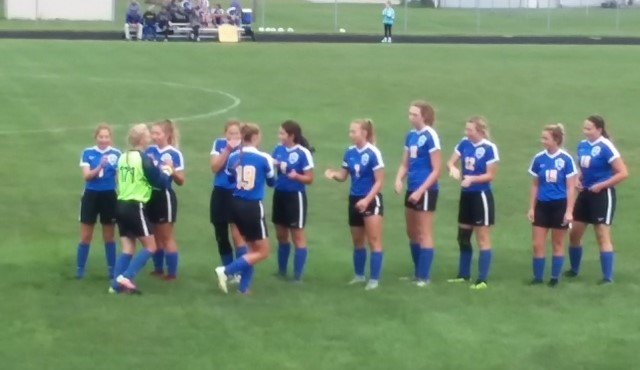 On Monday night those who went to the Pirate Pitch were expecting a tight game between two teams that have started the year out in winning way got that and more. Continental played host to Van Buren in Girls Soccer underneath threatening skies and nice cool weather. Pirate Alex Hoeffel opened up the scoring when her shot from the 15 went in with less than 2 minutes off the clock. It would over 20 minutes before next goal was scored and it was also by a Pirate. Addy Armey put a deflected ball by the Black Knights goalie into the goal at the 15:34 mark. At the 11:48 mark the Black Knights scored off a throw in play. 2-1, Pirates. At 6:59 Pirate Maddie Burke put a deflection off of the goalie to make it 3-1 Pirates. At 4:01 the Black Knights made it a one goal game when they put in a goal off of a free kick. Continental 3, Van Buren 2 Half.

The second half saw adjustments being made that limited the goal scoring chances for both sides. The Black Knights did break through the Pirates defense with 2335 left in the game as they scored on a nice crossing pass to tie the game at 3. Pirate Hoeffel would find the back of the goal a second time as she rifled a shot that went through the goalie for a Pirate 4-3 lead. The Pirate defense held the Black Knights at bay for a Pirate 4-3 win.

Van Buren outshot the Pirates 15-12. Pirate Goalie Angel Brzozowski had 7 saves. The Black Knights and the Pirates both had 1 corner kick.

Continental improve to 5-2 and will take on Northwood on Saturday at home. Van Buren is now 2-2-1.