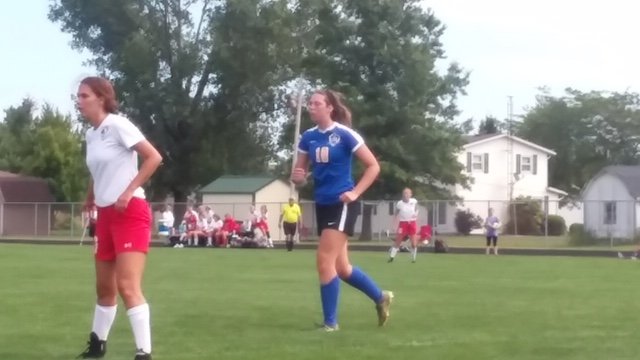 A close score at the half opened up to the Pirates in the second half when Continental High Girls Soccer hosted Delphos Jefferson in non league action on Saturday.  Maddie Burke got the Pirates on the board by putting a shot around 3 Wildcat defenders with 19:01 left in the first.  This would be the only score of the half.

The Pirates would score early in the second half as Alex Hoeffel beat the goalie on a 1×1 with 15 seconds gone in the half to make it 2-0 Pirates.  The Pirates would score again at the 34:03 mark when Addy Armey would float a shot from the 15 over the goalie.  Pirates 3-0.  Addy Armey would make it 4-0 with 16:20 left in the game as she scored her second goal of the day.  The final score would be 4-0 as Alex Hoeffel would put one in the back of the net with 4:32 left.

Continental moves to 3-1 and will open their Putnam County League schedule on Tuesday when they host Fort Jennings.

Hoeffel is now in a tie for 5th in the OHSAA Girls Soccer Career Goals with 137 goals.