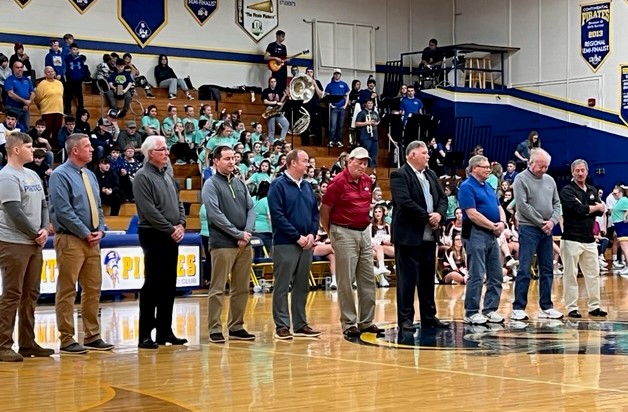 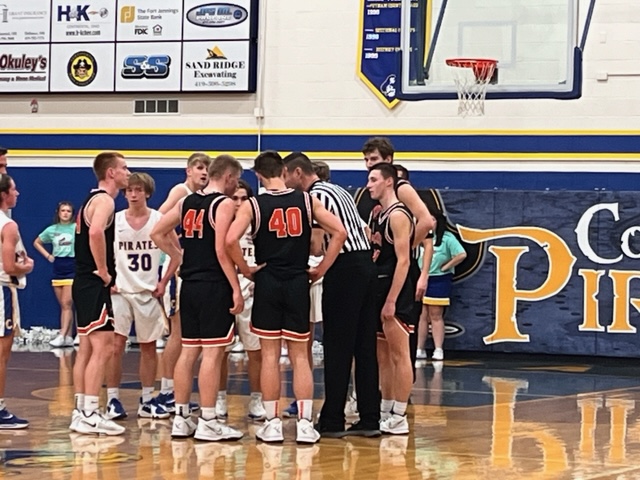 A special night at the Cove on Friday night did not look special as Fort Jennings boys took a big lead in the first quarter only to see the Continental High Boys take the rest of the quarters.  The Varsity game started after a tribute to the 1972 Continental Class A State team where 5 members of the team (Jim Troyer, Ron Weisenberger, Tom Rue, Greg Spitnale), Assistant Coach Dennis Potts, and 4 representatives of the departed (Chris Britsch, Frank Tegenkamkp, and Coach Don Huber).  Thanks to all involved in this tribute it was great to see the team and relive a moment of Pirate greatness.
It looked like it was going to the Musketeers night as they came out and dominated the first quarter and finished both first half quarters with buzzer beating baskets.  Pirate Rhenn Armey opened up the games scoring with a basket only to have the Musketeers put in a pair of baskets and a 3 to take a 7-2 lead.  Konnor Knipp Williams would stop the Musketeer run with a basket 7-4 Musketeers.  A basket by the Musketeers was followed by a Senior Wyatt Davis basket for 9-6 Musketeer lead.  The Musketeers would get the final points of the quarter on a buzzer beating 3.  Musketeers 12-6.
The second quarter had Pirate Senior Andrew Hoeffel hot hand put the Pirates in the lead for good.    Hoeffel started the Pirates quarter scoring by hitting a pair of 3s from the corner to make it a 12 all game.  A Musketeer basket put them back in the lead for the last time 14-12 Musketeers.  A basket by Hoeffel tied the game was followed by a 3 from Carson Etter and the Pirates took the lead for good 17-14.  A Musketeer basket was followed up by a C Etter 3 to make it 20-16 Pirates.  A basket by the Musketeers made it a 2 point game 20-18.  The Pirates would string together 5 points when Knipp Williams would make a free throw and Hoeffel convert a 4 point play to push the Pirate lead 7, 25-18.  The Musketeers were not done as they would finish off the half on a 4 point run highlighted by a basket at the buzzer.  Pirates 25-22 at half.  Hoeffel would end the second quarter with 12 points.
The second half was all about Pirate seniors stepping up and hitting a combined 18-21 from the line and at one point draining 13 in a row.  The Pirates would open the second half scoring with an Armey basket, a free throw from Knipp Williams and then the seniors would start a streak from the foul line with Senior Alex Sharitts hitting a pair.  Pirates 30-22.  The Musketeers would put in a free throw to make it 30-23 Pirates.  The Pirate D held the Musketeer scoreless the first 4 minutes of the quarter.  A basket by Davis was followed by a pair of Musketeer 3s to make it Pirates 32-29. Daivs would convert a 3 point play to finish off the 3rd scoring.  Pirates 35-29.
The fourth quarter was all about the Pirate Seniors as they would put in 15-18 from the line.  Musketeers started out the fourth with a 3 and a basket to make it a 1 point game 35-34.  Pirates Davis and Hoeffel would both go 2-2 from the line to push the Pirate lead to 5, 39-34.  A basket by the Musketeers was followed by Hoeffel going 4-4 from the line as the Pirate opened up a 7 point lead 43-36. A free throw by the Musketeers would be followed by a pair of free throws by Sharitts and a free throw by Davis.  The miss by Davis was the first in 13 free throws for the Pirates.  Pirates 46-37.  A basket by the Musketeers was followed by the Pirates going 6-8 from the line with Hoeffel making 3 and Davis and Armey making 1 each.  Pirates 51-39.  The Musketeers would have a pair of baskets around an Armey free throw for a Pirates 52-43.  The the final quarter the Pirates made their first 10 free throws (they had 13 in a row when added to the last 3 made in the 3rd) and shot 17-22 from the line for the quarter.
Senior Andrew Hoeffel led the team with a career high 21 points (10-11 from the line) while Senior Wyatt Davis added a career high 11 points (5-7 from the line).  Carson Etter and Rhenn Armey added 6, Senior Alex Sharitts (4-4 from the line) and Konnor Knipp Williams both had 4 points.  The Pirates hit five 3 pointers (all in the second quarter) with Hoeffel hitting 3 and Etter hitting 2.  The Musketeers also made five 3s.  Continental was 23-31 from the line (Seniors combined were 19-22) while the Musketeer were 2-7.
Continental improves to 4-10 and will host North Central on Friday in a non league game.  Fort Jennings falls to 2-11.  Fort Jennings won the Junior Varsity game 40-28.
In addition to the great reunion of the 72 Boys State team it was also mini cheerleader night.  So their was plenty of spirit in the house.
–Mike Jones, Sportswriter 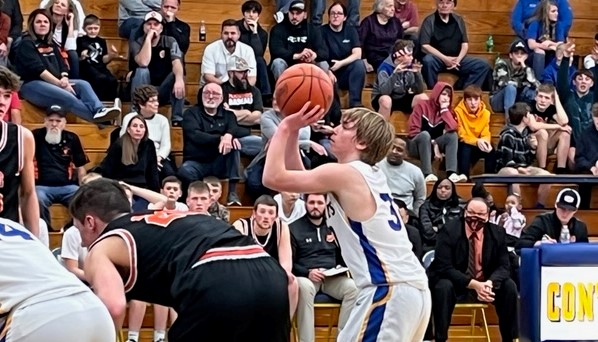 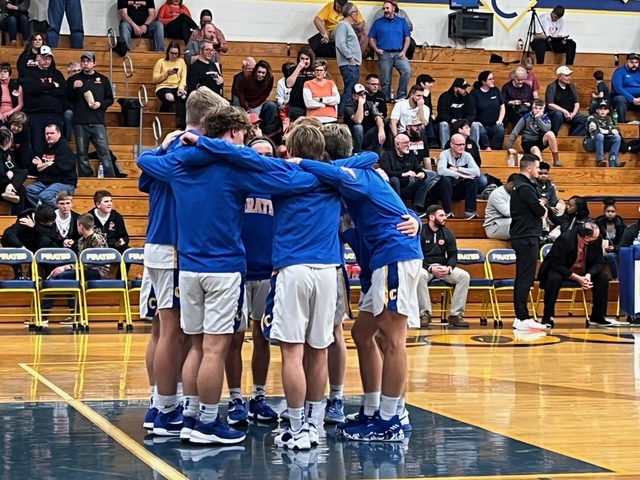 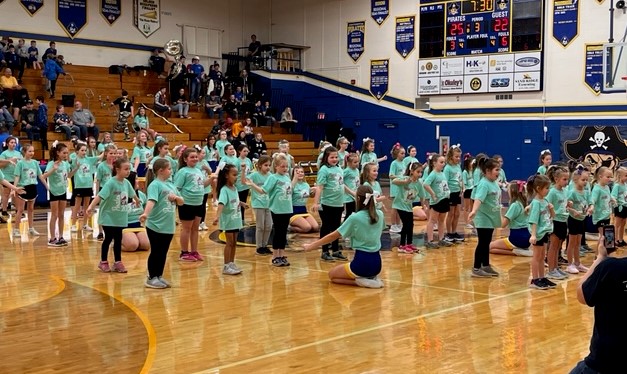