Why is this impressive? According to TestOut, an online lab simulation testing program for academia and IT professionals, in a typical school year, most Network Systems students obtain 1 or 2, and in rare circumstances 3 or 4 certifications during their 2 years in the program, but Christapher obtained six TestOut certifications before his senior year. That’s not all. Christapher earned high test scores on his Switching Pro and Routing Pro certifications, both scores being hundreds of points above the average test takers in Ohio, and in the United States; this includes high school students, college students, and industry professionals.

So what exactly is Chistaphers motivation? “To catch up with Gage,” Piske said, with a smirk. Gage Smith (Paulding) was a 2020 graduate of the Vantage Network Systems program, and was in the program for only one year. During Smith’s time in the program, he earned an impressive five certifications, and similar to Christapher, scored in the top 10-30 percentile nationwide. He also received national recognition on the TestOut Facebook page. Christopher has now passed Gage in the number of certification earned while at Vantage, and continues to earn more.

“Obviously, I want to improve my knowledge base,” Piske admitted, “I plan to keep earning more certifications this year and learn skills that are associated with certifications. It just seems like a really good opportunity to be able to conquer this number of topics so quickly and get such a steady foundation going into college.” So far, Piske has added two more certifications his senior year, making a total of eight, including; PC Pro, Linux Pro, Security Pro, IT Fundamentals, Routing Pro, Switching Pro, OSHA, and the Ohio Department of Education WebXams – Advanced Level.

What attracted Christapher to an IT program? “Gaming systems,” said Piske. “I was attracted to gaming systems from a young age because it seems interesting that you can create an intricate experience from code.” Piske continued, “Video games have been a large part of my life and it’s interesting to see many of them portray messages to students.” Christapher plans to continue his education in Computer Science, with a focus on game programming.

Piske is not the only student racking in multiple certifications. Riley Boroff (Lincolnview) is right behind Piske with five certifications; including PC Pro, Linux Pro, Security Pro, IT Fundamentals, and Ohio Department of Education WebXams – Advanced Level. When asked what Riley’s motivation was, he simply replied, “Free cost. These certifications are a lot of money, so why not do them for free.” At Vantage Career Center, all students are given ample opportunities to earn licenses and certifications within their prospective career for free.

Boroff slyly admitted racing Piske to the finish, saying “There are only so many certifications left, so we will probably end up with the same number.” Boroff, who is also a Van Wert County Junior Rotarian and NTHS inductee, plans to attend the University of Northwestern Ohio (UNOH) with a focus in Cyber Security.

“This year has been very competitive,” says Network Systems Instructor Larry Regedanz. “Last year, we had a senior in the junior class (Smith) take the lead, and other students saw that, birthing a competition to see who could get as many certifications as they can.” Regedanz praised his students for having a 100% pass rate on their WebXams, several passing the advanced level, which he has never experienced in his teaching career. As the students round the corner into the second nine weeks, Regedanz is excited to see what they accomplish, saying “We will see what the future holds.” 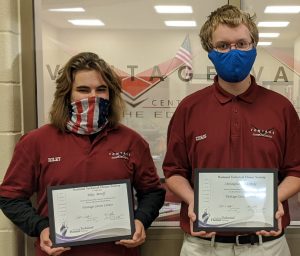 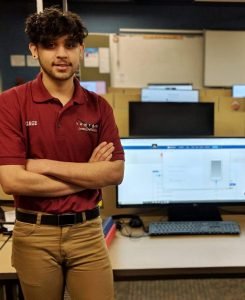