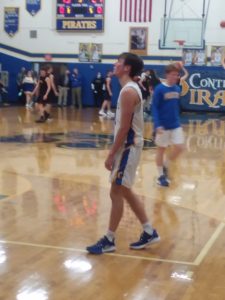 Friday night saw the Kalida Wildcats sink 3s to finish off the waning moments of both the first and second quarter that went a long way towards deciding the Putnam County League matchup against host Continental,  The Pirates opened up the game winning the tip when Andrew Hoeffel moved quickly through a pair of Wildcats to capture the loose ball.  The Pirates then opened up the game’s scoring with a Mitchell Coleman 3 to take a 3-0 lead.  A 3 point play  by the Wildcats was followed by a Hoeffel basket to give the Pirates their last lead of the game 5-3.  The score stayed that way till less than 5 seconds left in the quarter when the Wildcats would hit a 3 and take the lead for good at 8-5 after 1.
The second quarter scoring started by the Wildcats upping their lead to 5 with a basket.  The Pirates would then put in their first points of the second with a Hoeffel basket.  Wildcats 10-7. The teams traded 2 points with the Wildcats hitting a pair of free throws and the Pirates getting a Coleman basket. Wildcats 12-9.  The Wildcats would make a 3 and the Pirates a 2 as Gavin Huff would make a basket.  Wildcats 15-11.  Another Wildcat 3 was followed with a Pirate 2 with Coleman scoring.  Wildcats 18-13.  The Wildcats would hit another 3 with less than 5 seconds to go to push their lead to 8 21-13 Wildcats at half.

The third quarter had the Wildcats scoring first with a basket which Huff followed up to keep the difference at 8, 23-15.  Huff put in a basket again after a Wildcat basket basket to make it 25-17.  It was then all Wildcats as they would reel off the next 16 points to take a 24 point lead 41-17.  A Huff basket and a Coleman free throw would make it 41-20 Wildcats.  The Wildcats would finish off the quarter scoring with a basket for a 43-20 Wildcat lead after 3.
The fourth quarter would be even as both teams would score 9 points.  The Pirates were never able to cut into the Wildcat lead.  Wildcats 52-29 final.
Continental was led in scoring by Mitchell Coleman with 10 points while Gavin Huff put in 8.  Andrew Hoeffel scored 4, Rhenn Armey, Alex Sharrits, and Konner Knipp Williams 2 each, Bryce Recker 1.  Coleman hit the only 3 for the Pirates while the Wildcats drained 7.
Continental falls to 6-13 (1-5 PCL) and will travel to Holgate on Saturday.  Kalida improves to 16-4 (5-2 PCL).  The two team will have a rematch in OHSAA Division IV Elida District sectional semifinal action.
Mitchell Coleman now stands at 1197 points.
— Mike Jones, Sportswriter