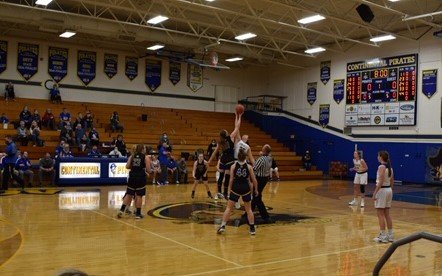 A Saturday afternoon post New Years tilt saw Continental High Girls take an early lead but saw Miller City control the second quarter in Putnam County League action.  The Wildcats got on the score board first with a basket but Pirates followed that up with a Catelyn Etter basket and 3 for a Pirate 5-2 lead.  The Wildcats would string together a pair of basket to retake the early lead 6-5.  A basket by Maddie Burke would make it Pirates 7-6.  That would be the last Pirate lead of the lead as the Wildcats would hit a 3 to finish the first scoring at 9-7 Wildcats.
The Wildcats would put in the 6 points of the second quarter with 3 baskets to make it 15-7.  A 3 point play by Tygre Troyer would cut the Wildcat lead to 7, 15-10.  A 6 point Wildcat run would push their lead to 11, 21-10.  Etter would make a pair of free throws to make it 21-12.  A Wildcat 3 in closing seconds of the half would result in a 24-12 Wildcat lead at half.
The second half would start with the Wildcats putting in a pair of baskets to make it 28-12.  A basket by Etter stopped that Wildcat run.  Another pair of Wildcat baskets would push their lead to 32-14.  The Pirates would put together a 6 point run when Etter would make a pair of free throws and a basket along with a basket by Jensen Armey.  Wildcats 32, Pirates 20.  A pair of baskets by the Wildcats was followed by a Burke basket to finish off the third quarter scoring .  Wildcats 36, Pirates 22.
The Pirates would start the fourth quarter strong with baskets by Troyer and Burke to cut the Wildcat lead to 10 36-26.  The Wildcats would put in 2 baskets to up their lead to 14, 40-26.  Burke made a free throw for the Pirates 40-26.  A trio of baskets by the Wildcats made it 46-26 Wildcats.  Burke would finish the Pirates scoring with a basket and free throw while the Wildcats would finish up their scoring with a basket.  Wildcats 48-30 final.
Continental was led by Catelyn Etter with 13 points.  Maddie Burke scored 10, Tygre Troyer 5, and Jensen Armey 2.  The Pirates Etter made one 3 pointer while the Wildcats put in 2.
Continental falls to 3-7 (0-2 PCL) and will travel to Crestview on Monday.  Miller City improves to 7-2 (3-1 PCL).
–Mike Jones, Sportswriter 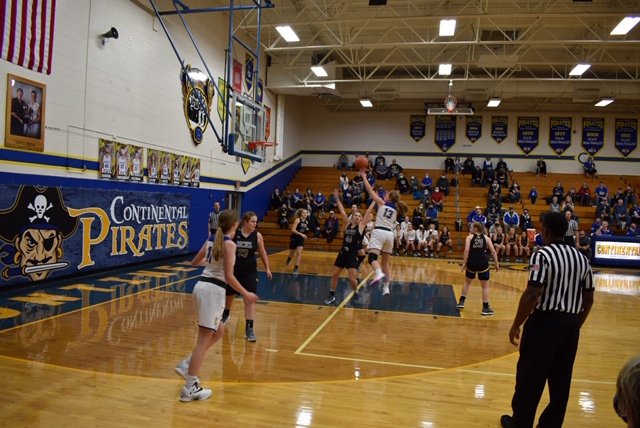 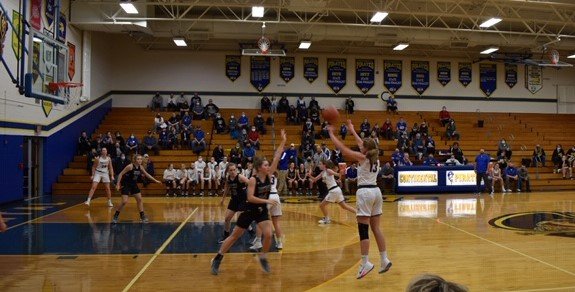