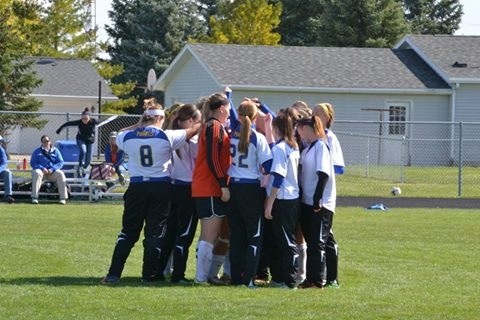 This years Lady Pirate Soccer team has shown that they are one of Northwest Ohio’s finer program. Following up last year’s regional semifinal appearance this year they were runner up in the PCL and support an excellent 10-5-1 record. They are also #4 seed in the Celina District where they host a sectional final game on Saturday October 18 at noon. This year Senior Soccer team members are McKenna Scott, Taylor Niese, Caitlin Geckle, Christina Sarka, Andi Krendl, Emma Recker, and Makenzie Mansfield..

The Blue Jays from Delphos St Johns provided the oppositon and provided a worthy opponent as the two team played to a 0-0 tie at half. In the second half the Pirates hit the back of the net with Blair Tegenkamp putting in a shot with 25:18 left in the game. Makenzie Mansfield added an insurance goal with 19:18 to go. Emma Recker and Ashley Mansfield combined for the shutout in the goal.

Congratulations to the Senior Pirates and Good Luck on the tournament trail.