Lillian was a 1948 graduate of Continental High School and a 1947 graduate of Frederick’s Beauty Academy in Lima.  While in school she worked for Pop at the garage for years. She also worked at Mildred’s Beauty Shop in Continental while she was a senior in high school and Gordon’s Beauty Shop in Lima after graduation.  During the summer months, she worked at Louise’s Beauty Shop in Oakwood.  She then worked as a secretary for Sylvania Electric, Ottawa and then the Bureau of Employment Services in Defiance. Lillian went on to work 38 ½ years for Continental Local Schools, serving as secretary and eventually superintendent secretary. While employed at Continental Local Schools, she served as regional secretary/treasurer in 1986 for the Continental Centennial. After retirement in 1995, she was appointed to the Putnam County Educational Service Center, where she served for 25 years.

Lillian was a member of the Continental Chapter Order of the Eastern Star, serving as Worthy Matron 10 times, also as district president in 1970 and Grand Martha of the Grand Chapter of Ohio in 1981.  She also served on various committees for the Grand Chapter.  Lillian volunteered for Jr. Achievement, was a HOSTS mentor, F.H.A. mother, Brownie Scout leader and a 4-H leader. She enjoyed cake decorating, sewing, painting and quilting.  She and her husband purchased the Continental Flower Shop in 1982 and operated it for over 26 years.

Funeral service will begin 11:00 a.m., Monday, April 11, 2022 at HEITMEYER FUNERAL HOME, Continental with Rev. Charles Schmunk officiating. Burial will follow in Monroe Cemetery, Continental. Visitation will be from 2 – 8 p.m. on Sunday and 10 – 11 a.m. on Monday at the funeral home.

Memorial donations may be made to Continental Local Schools or Putnam County Educational Service Center. 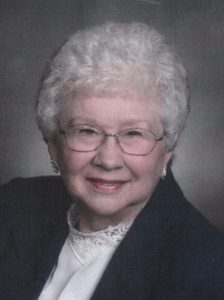