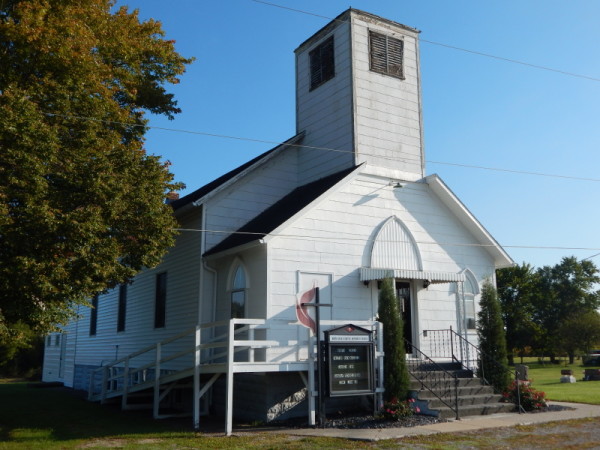 The October issue of “News From Our Pews”, North Creek United Methodist’s monthly newsletter was the final issue. Through the years, this monthly newsletter was mailed near and far, keeping church members, past and present, in touch with their home church. The final issue contained many historical articles that may be of interest to others in our community. Thank you to the dedicated individuals who wrote, edited, assembled, and mailed the newsletter for all those years and also a BIG thank you for letting the eNews share your final issue!

This church was moved here to its present location from Wisterman in the early 1900’s. Those assisting with the move was Duncan Dewar, Charles and Ben Schafer (Ben was my father). The first services were held in the church in 1903, the pastor was Rev. Weaver. When the church was first brought in there was only the sanctuary, it was heated with a pot belly stove in front, using wood and coal for fuel.

In 1922 the basement, which included a kitchen and furnace room was added. At the same time the entrance room and stair well was added to the front of the church. A new coal furnace was installed with registers in the floor to heat the upstairs (not very efficient). Around 1929 we remember the church mortgage being burned in the basement. Ben Schafer held the plate and Cash Johnston (Wayne’s dad) held the mortgage over it and lit it (very impressive to us youngsters).

Much of the money was raised by what was then known as the “Ladies Aid”. They had Penny Socials, Ice Cream socials, chicken suppers, and many other fund-raising activities. The Penny Socials were usually held at Halloween time. Everything was sold for one penny – cake, pie, sandwiches, and so forth. At that time they would usually sell chances on a quilt, and that would be drawn the same night. There were many from our church and surrounding churches that would come masked. There were prizes for the various categories, and much fun and fellowship was enjoyed by all. To be continued….

Join Pastor Rick Noggle and the congregation on Sundays with Sunday School at 9am and Worship at 10am.