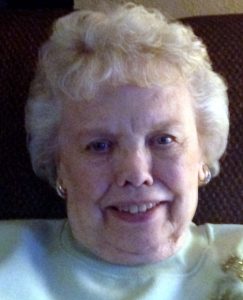 She is preceded in death by two sons-in-law: Ron Bibler and Jim Perry; a grandson: Ryan Bibler; and six siblings.

Mary worked as a seamstress at Delux Cleaners in Defiance, she had also worked at Dickie’s Tent Factory in Oakwood.  She was a member of the American Legion Auxiliary, Continental and VFW Auxiliary, New Bavaria.  Mary was past member of the St. Joseph Altar Rosary, North Creek.  She was member of St. John the Baptist Catholic Church, Continental, and also the Catholic Ladies of Columbia.

Funeral mass will be held 10:30 a.m. Friday, October 16, 2020 at St. John the Baptist Catholic Church, Continental with Father Mark Hoying officiating.  Burial will follow at St. Isidore Cemetery, Cuba.   In keeping with the social distancing guidelines, visitation will be held Thursday 2 to 4 p.m. and 6 to 8 p.m. at HEITMEYER FUNERAL HOME, Continental, and one hour prior to mass at the church.  Masks are required upon entering the funeral home and/or church.

Memorial donations may be made to St. John the Baptist Catholic Church, Continental.